TOP > Article > Creating events that connect the district with the people. The future of “Marunouchi,” which creates attachment from enthusiasm and emotions
SHARE
TO TOP 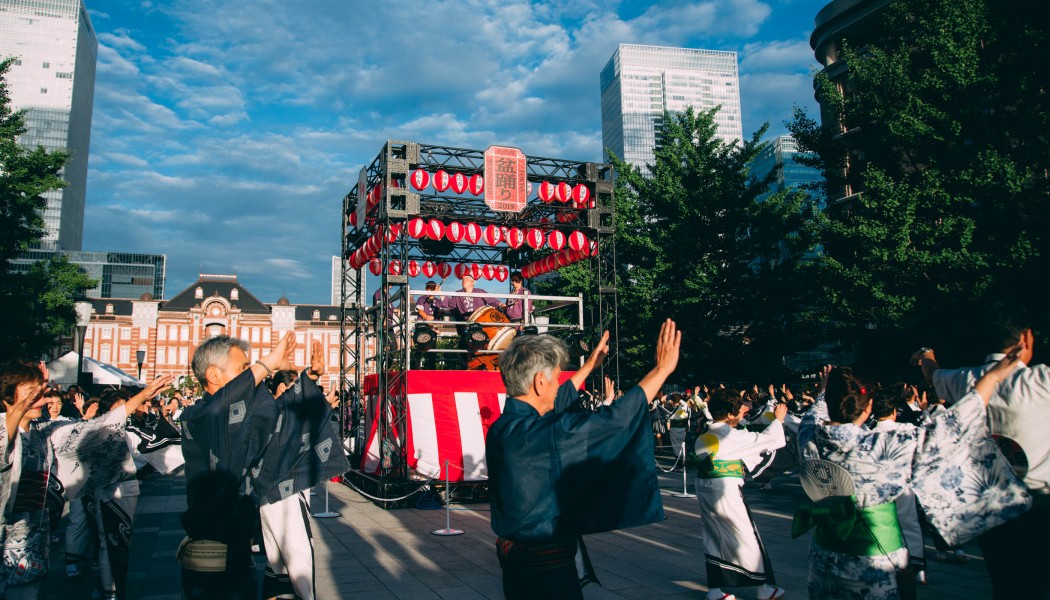 Creating events that connect the district with the people. The future of “Marunouchi,” which creates attachment from enthusiasm and emotions

The long-lasting cold summer, which was rarely seen in recent years, is completely indifferent.

The “Marunouchi Ondo” song starts along with Ohayashi (musical accompaniment) under the penetrating blue summer sky. At 6:00 pm., men, old and young, wearing gorgeous Yukata (light cotton kimonos worn in the summer) gather in front of the festival scaffold that was built with the Tokyo Station in the background, and the enthusiasm increases. The lively Ondo song sounds throughout the town, further enlivening the atmosphere of the festival.

Children play in the Uchimizu (sprinkling of water) at the same time that the start of the festival is announced. A middle-aged man in a suit runs to buy festive food, like shaved ice and frankfurters, at a nearby stall. A seated gray-haired grandma leads the Ondo song with only her hands. Spectators who were watching far away gradually join the ring of Ondo, and a young woman wearing a Yukata, who was previously embarrassed, also gradually floats into the festival’s atmosphere.

The Marunouchi Bon festival dance (Bon Odori) triggers unbelievable excitement in the office district on Fridays in 2019. What kind of impact does such an event have on the district? We talked to the creators of the “Hare” stage in Marunouchi, the premier office district in Tokyo.

・The past and present of Marunouchi, once said to be a “district for office workers.”
・Marunouchi causes enthusiasm beyond the company walls
・From the 2019 Rugby World Cup into 2020
・Takeaway

The past and present of Marunouchi, once said to be a “district for office workers.” 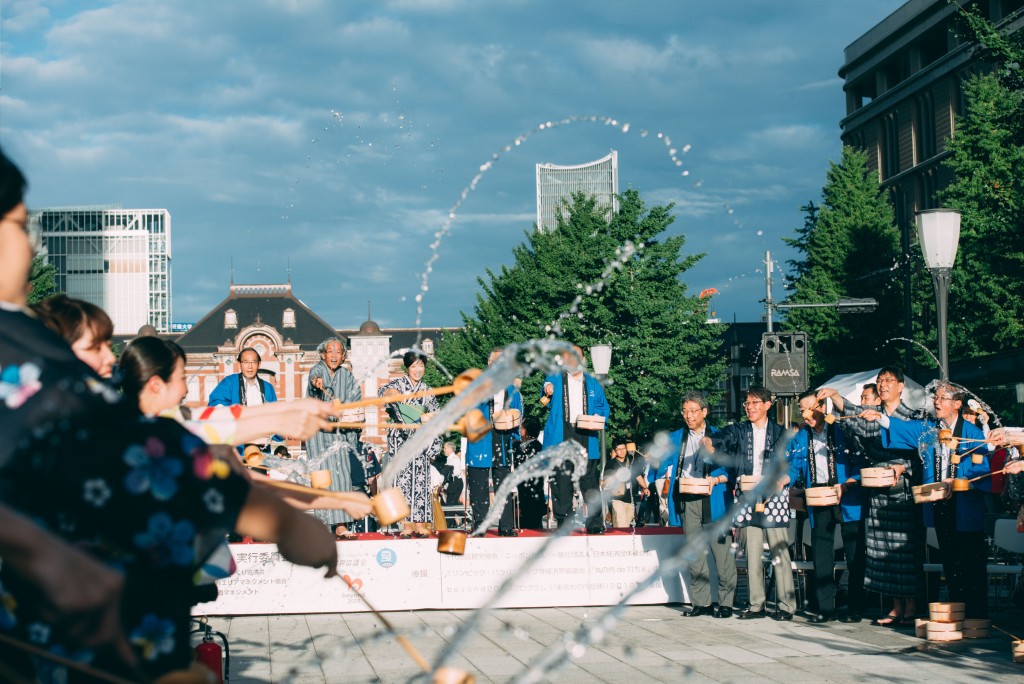 Marunouchi has two names: “Japan’s No. 1 business district” and “the district of Monday to Friday” (because there are many office workers, and it is crowded from Monday to Friday). Since the 1990s, various large-scale developments have been undertaken under the concept of the “reconstruction of Marunouchi.” In addition to the creation of such “hard” developments, since the opening of Marunouchi Building in 2002, “soft” activities have also added enrichment. The “Otemachi, Marunouchi, and Yurakucho Summer Festival 2019,” held at the end of July, is part of this.

Seasonal events, such as classical music concerts in spring and the Bon Odori festival in summer, are held in Marunouchi. Since the enhancement of “soft” aspects, the area has changed to become somewhere to visit for reasons other than work, and there is an increasing number of visits from holidaymakers, including families with children, who enjoy shopping around Marunouchi and using the Skybus.

Marunouchi has been transformed into a “Monday to Sunday” district, so that it can be enjoyed by workers and visitors together. Mr. Tanimura of the Brand Promotion Department of Mitsubishi Estate, which supports such changes in the district, is one of the brains behind the new Marunouchi. How does Mr. Tanimura feel about creating a lively scene? 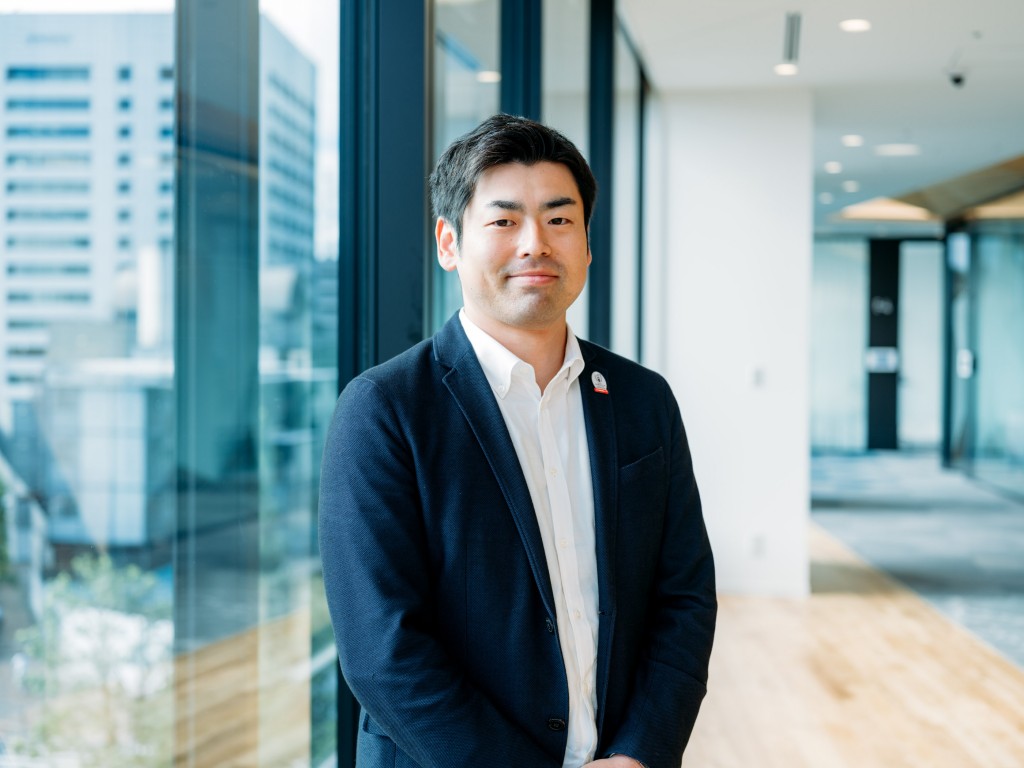 Masashi Tanimura
Masashi joined Mitsubishi Estate in 2008. He was responsible for IR in the Public Relations Department, worked in the building development section (Marunouchi and Kanda area, etc.), and then assumed his present position. He also worked concurrently at the Project Promotion Office for the 2019 Rugby World Cup

Tanimura: “A long time ago, Marunouchi had a strong image of ‘a district specifically for offices.’ As work styles change in the future, and as the number of telecommuting and remote workers increases, there will be fewer visits to offices for meetings. If you didn’t need to commute to Marunouchi, would you ‘still come?’ A lot of people might say ‘I’m not coming.’ I have a sense of crisis about this situation. That’s why I believe we can contribute to the solution from the aspect of organizing events, even though we have limited ability.

In addition, if a range of people, other than workers, gather in the district for the purpose of an event, we believe that additional livelihoods will be born, leading to the activation of the district. Even people who don’t have direct roots in Marunouchi, such as visitors, will learn new ways to enjoy Marunouchi through events, and if they can form an emotional memory that is strongly associated with the district, they will also come back to Marunouchi at some point. As represented by the ‘Marunouchi Singing Contest,’ which is one of the plans for the summer festival, we created an image of ‘if you come here “something” fun will happen,’ and we want to deepen people’s attachment to the district by increasing the amount of participatory content that personalizes the events in the district.” 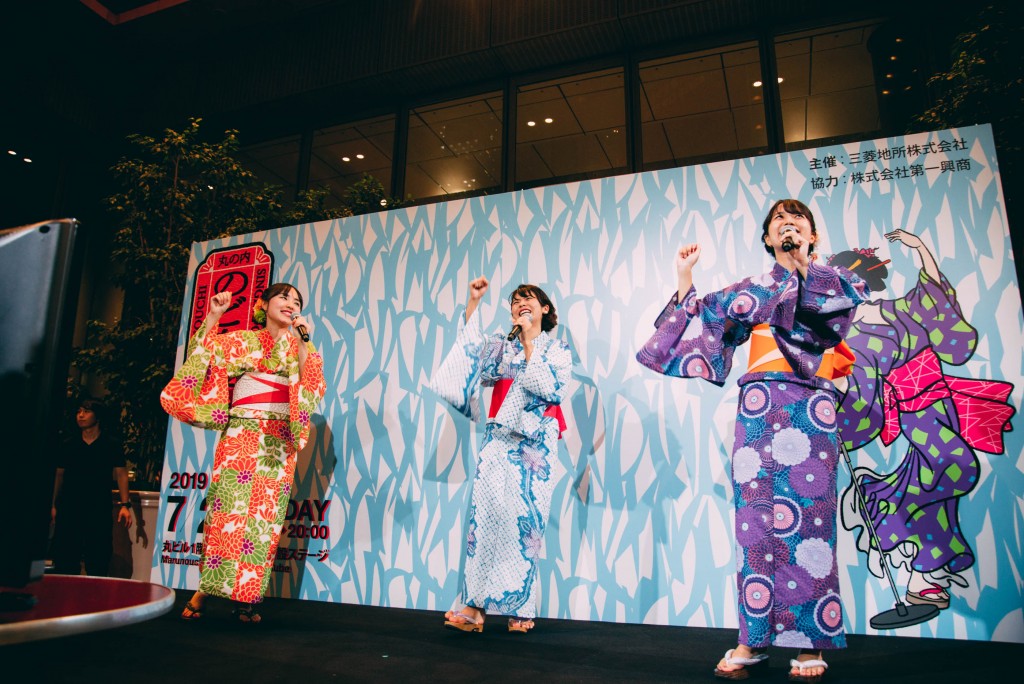 “Seasonal lively scenes” are social events where you can experience the changing of the seasons, starting with the summer festival, which is the scenario that was described at the beginning. Events where people can enjoy classical music are held during the beautiful green Golden Week, and art and food events are held in fall. In winter, there are Christmas illuminations, as well as the “Santa Parade,” where Marunouchi workers dress up as Santa and thank people for visiting Marunouchi.

Some of these events include events that are unique to the “Japan’s No. 1 business district.”

Tanimura: “Sometimes, ‘business creation’ is necessary when planning an event. Speaking of so-called business events, there are many, such as those held in a large exhibition hall, where a booth is set up for each participating company, but we went a little further and made it so that people could have fun while participating.

Most recently, we hosted a ‘business bar’ in conjunction with NewsPics. It was planned based on the concept that businesspeople have conversations in bars they casually frequent, so it would be fun to talk openly while drinking alcohol. People like Mr. Takafumi Horie, a businessman, Naoki Inose, a former governor of Tokyo, and Mr. Yuji Maeda, the CEO of SHOWROOM, speak at a booth that looks like a bar, and the atmosphere of ‘enjoying business discussions casually while drinking alcohol’ is valued.” 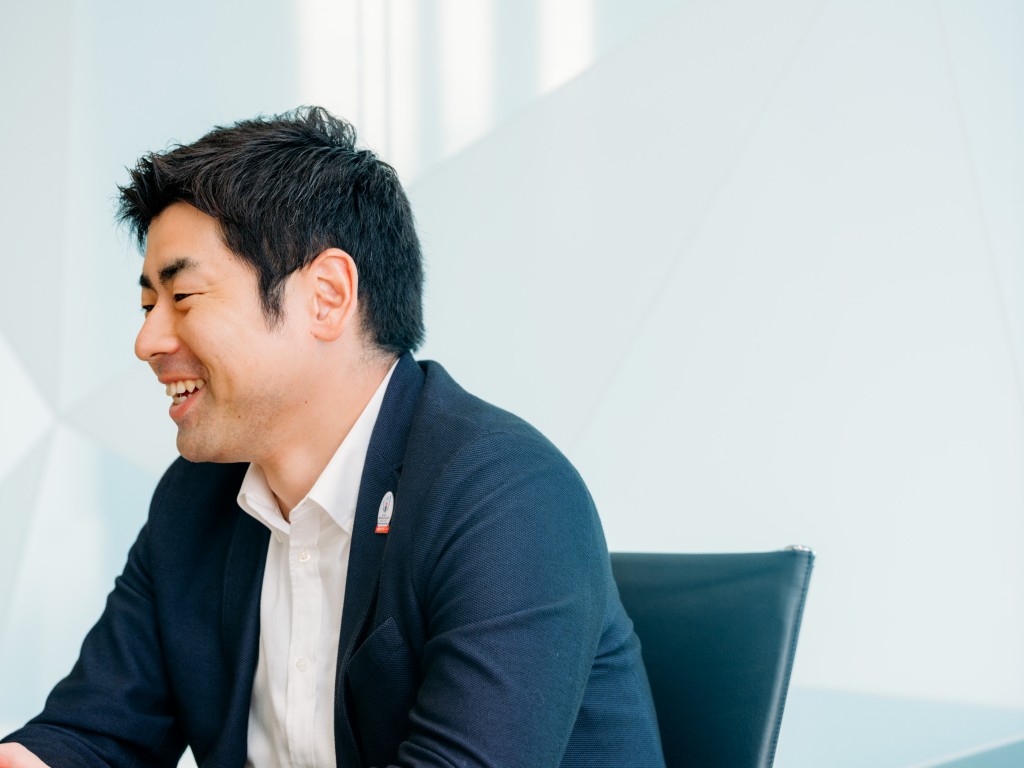 There is an example of such an initiative having produced results, and deepening the connections of participants. This is a tug-of-war corporate competition that takes place once a year. The companies participating in the third competition this year made up around 100 teams, mainly from Marunouchi, compared to about 20 teams that participated the first time, which shows that the excitement is increasing. Participant questionnaires collected after the competition also showed a very high degree of satisfaction.

Tanimura: “A lot of Marunouchi workers are chic, but from the standpoint of organizing an event, this sense of shyness may lead to the impression of a lack of excitement, and there are times when one may feel that ‘it is a waste of time.’ That’s why we developed content that can be enjoyed regardless of age, sex, or nationality, such as a tug of war. Everyone is very feverish in the support of the game, even those who are usually chic and shy, and when someone wins, they have a party-like celebration. After completing the heated game, one can see friendships forming between rival companies that previously were opponents.

NTT Communications won the competition this year. The OB of a participating adult rugby team said in a victory speech, ‘Let’s exchange business cards if you are interested in rugby,’ and many people exchanged business cards. It is not only about enthusiasm within the company, but also about new connections with other companies.”

The excitement of the entire Marunouchi could not have been achieved by Mitsubishi Estate alone. Mitsubishi Estate coordinated and collaborated with the government authorities of Tokyo and Chiyoda Ward, among others, as well as other landowners, who worked together on the development plan of Marunouchi from the beginning. The fact that they communicated with each other for a long-time produced results.

Tanimura: “We started working seriously on changing this district in the 1990s, but at that time, there was already a community in Marunouchi that had been targeted for reconstruction. I think that the aim of the people involved was set, and it was easy to move in a better direction because the base was in place. If there had not been the common ‘thought’ of ‘wanting to make it an attractive district that represents Japan’ among the players in this district, the Marunouchi reconstruction would not have proceeded smoothly. 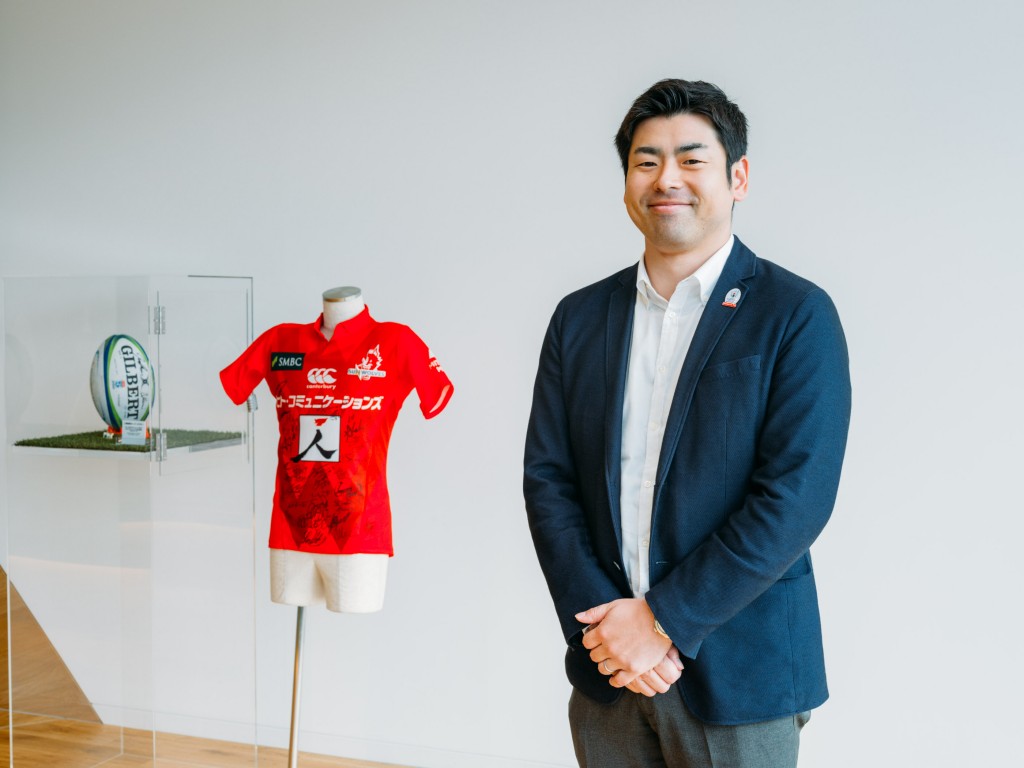 This year, Mitsubishi Estate became the sponsor of a large-scale sports celebration. As an official sponsor of the Rugby World Cup, which is regarded as the world’s third-largest sporting event, they hoped to use the power of sports to make Marunouchi even more exciting.

Tanimura: “We hope the enthusiasm for sports will be brought here to Marunouchi, not to mention the big mission of making the Rugby World Cup a solid success. The benchmark was the 2002 Korea-Japan FIFA World Cup. The excitement that happened at that time is still very memorable, but we want to surpass it. We think that the excitement of 2019 will continue into 2020. We would like to leave memories of enthusiasm, such as ‘it’s a sporting district!’ and ‘it seems like an interesting place to go,’ and pass the baton to the next year as a member of ‘Team Japan.’

We valued the idea that ‘there is a district because there are people,’ but we set ‘the power to think about people, the power to think about the district’ as our brand slogan. Our job is to change the flow of people and to satisfy people, and I feel it is more rewarding to be present at the moment when the emotions of ‘people’ change the district drastically. We value the energy of people and want to enrich Marunouchi with enthusiasm and a sense of vitality.

・“Marunouchi” is being transformed into a town where people can enjoy themselves, regardless of whether they are workers or visitors.
・In order to revitalize the town, we are conscious of participatory content that can personalize the events of the district.
・By carrying out a “tug-of-war competition” that old and young people can enjoy, not only is enthusiasm within the company born, but so too are new connections with other companies.
・We want to leave memories of enthusiasm, such as “it seems like an interesting place to visit.”