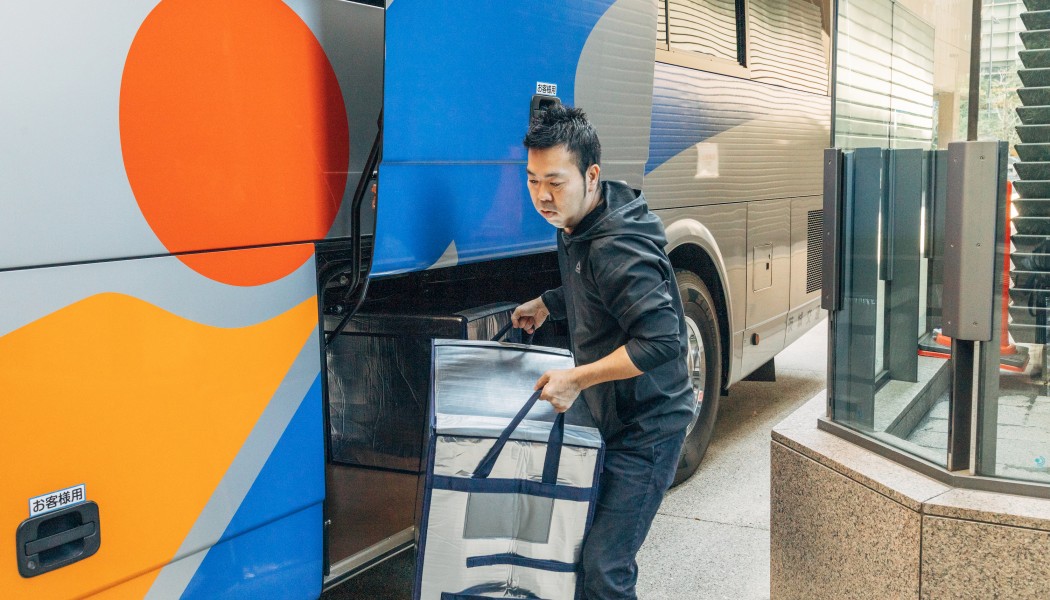 Five days a week seasonal delicacies are displayed in the corners of the various buildings that dot the Daimaruyu area. The lineup varies with the season, and a little by the day and week. On the day I visited during late autumn, fresh whitebait had just arrived from Kochi, red Akiboshi apples from Ishikawa and perfectly ripe and fascinatingly fragrant La France and ‘Nikkori’ pears from Yamagata and Tochigi. 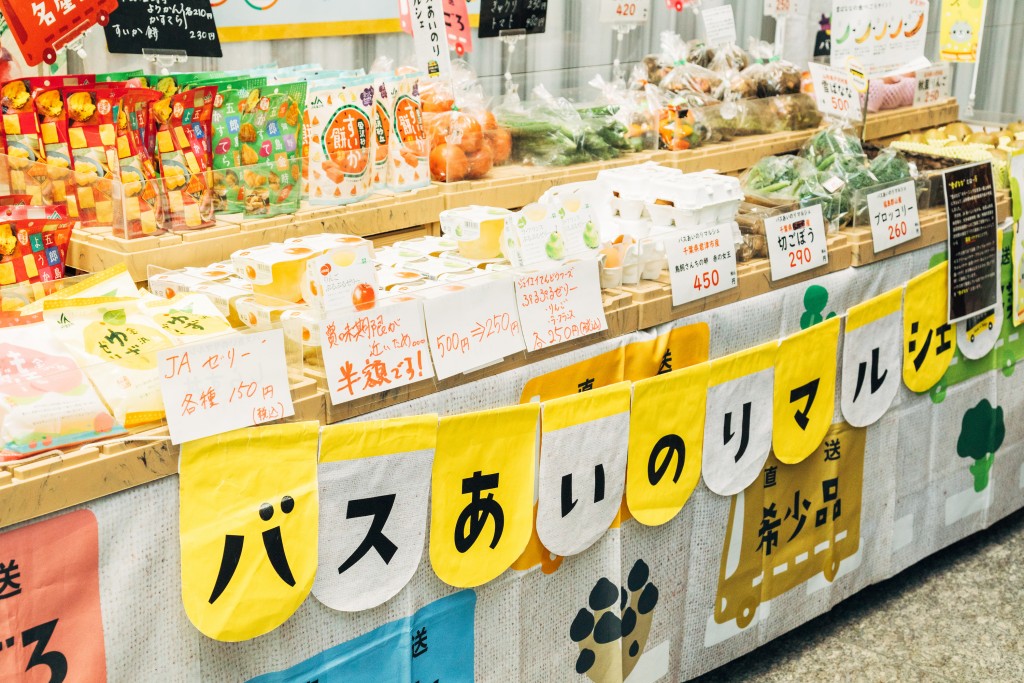 The foods displayed here at Bus Ainori Marche come from all over the country and are delivered using the otherwise wasted space on long-distance buses travelling over the country’s expressways. The vegetables, fruits, seafood, and raw meats are transported directly from the various production areas. They are loaded on sightseeing buses, bringing tourists from all over the country, for delivery to Tokyo. This value-added sales method is in adherence with the consolidated transportation method which combines people and cargo and has gained a lot of attention lately.
Small quantities of fresh seasonal items as well as local specialties which rarely seen in the Kanto area such as Kaga vegetables and fresh strawberries, ripe enough to be eaten the same day, are collected from producers all over Japan and sold in the Daimaru area. Up-Quality, Inc. and its president Mr. Izumikawa communicate with producers who grow such high-quality perishables, coordinate with bus companies, attract customers, and provide sales and branding. In collaboration with wholesalers, markets and other intermediate distribution players, the company, which was originally focused on marketing support for agriculture, forestry and fisheries, is providing valuable support to this industry

・The “Sanpo-yoshi” helped create transportation model of physical distribution
・Breaking through the status quo is not enough; negotiations with third parties, such as national and local governments are also important
・Mr. Izukawa’s style of rule (re)making
・Takeaway 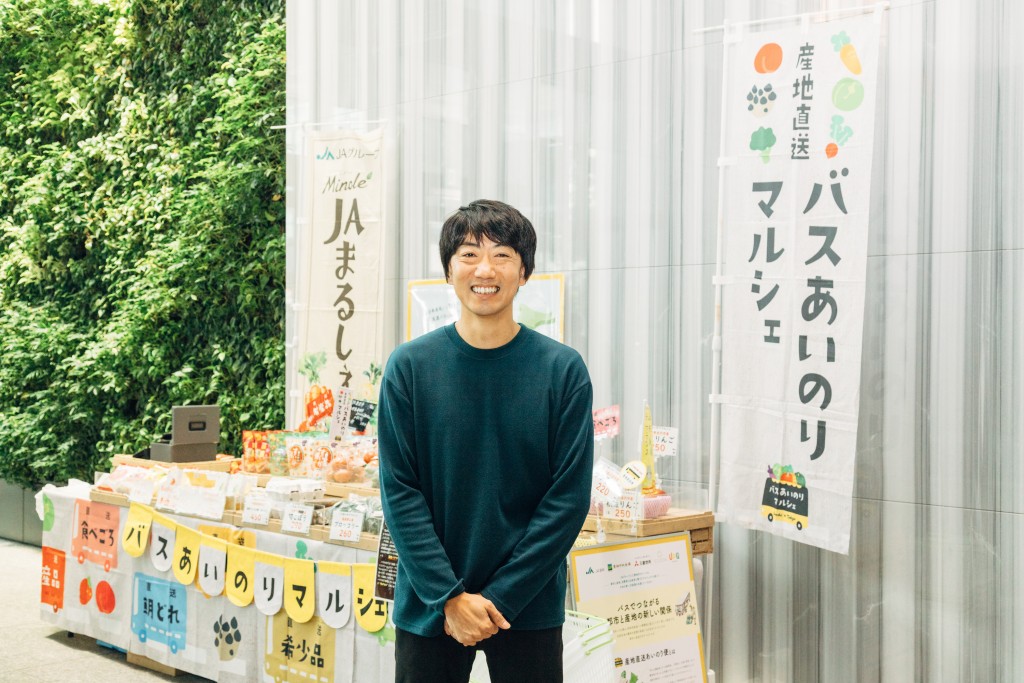 Dai Izumikawa
Born in Nagasaki Prefecture in 1979, Dai Izumikawa began working in Osaka in 1998. Currently he is the President of Up-Quality, Inc. His work involves in-store promotion planning and production as well as other forms of promotion planning and production, expanding consumption, and food/beverage sales involving the marketing of domestic agricultural products.

The ‘Sanpo-yoshi’created a model combining transportation and physical distribution. 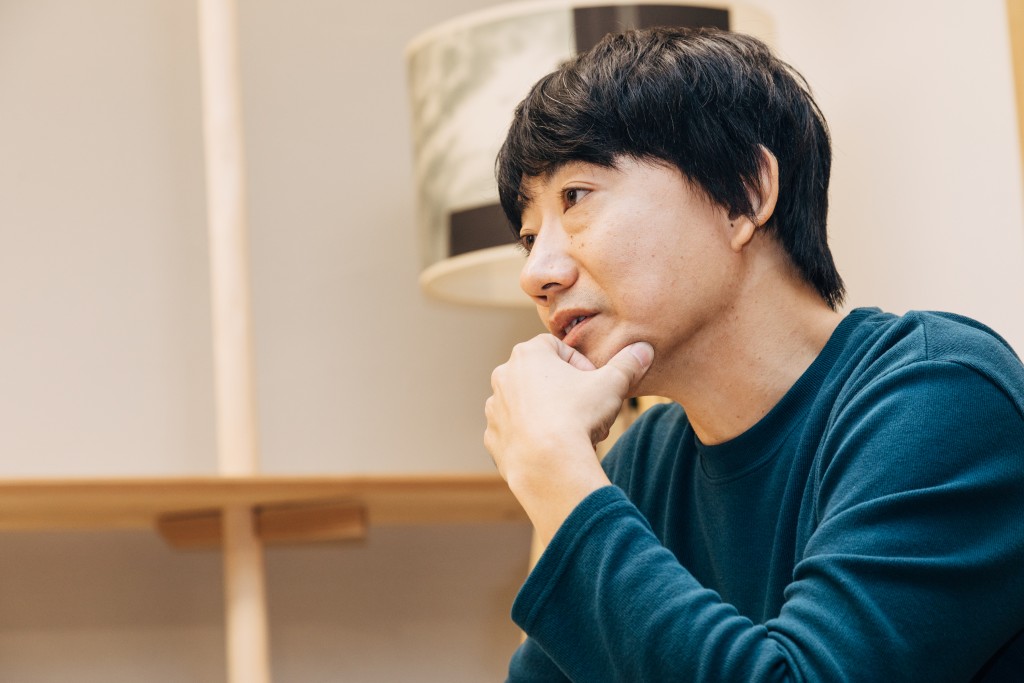 Mr. Izumikawa said, “Prior to Marche, restaurants and retailers as well as the agricultural products and food distribution industries started exploring if an approach involving a ‘physical distribution network’ was possible and how important it is. It was against this backdrop that in March 2017 four companies – the Central Union of Agricultural Co-operatives, the Norinchukin Bank, Mitsubishi Estate, and the Daimaruyu Eco-Symbiotic Community Development Promotion Association – launched the Daimaruyu Food Innovation project which focused one of the most tangible aspects:direct delivery from the production area,”
The idea of using long-distance passenger buses to connect the production area with the Daimaruyu area suddenly came up during a meeting. With the rotary space visible through the glass of the conference space of the Otemachi Park Building (Mitsubishi Estate headquarters building), a passenger bus might be able to enter the area and it might have enough extra space in the luggage storage area to carry small amount of cargo. Hence, that started the conversation with a bus company and the project slowly started from there.

Mr. Izumikawa further explained, “Although this is by no means the ‘Sanpo-yoshi’ of the Omi merchants for the people and business operators involved in this project, the fact that we were able to find positive aspects, allowing us to break through the status quo is probably the reason this project went on so smoothly. The bus company can take advantage of spare space in bus luggage storage areas as a new source of profits. With about 70% of bus operators in the red, it is difficult for them to launch new businesses. SI have it seems like the timing of this project was worked really well for them. Bus operators are also able to help local producers make profits and thus, build better relationships with local communities. Meanwhile, producers are able to deliver their produce- their fruit and vegetables – to consumers in optical condition. Up until now, physical distribution dictated that these products should be sold in pre-determined quantities, but due to the limited cargo space on buses, delivering smaller quantities is also possible with and this has also led to expansion of producers’ sales channels, while consumers are able to obtain rare, fresh and delicious foods at reasonable prices. I believe that the Bus Ainori Marche has led to a true organic connection. 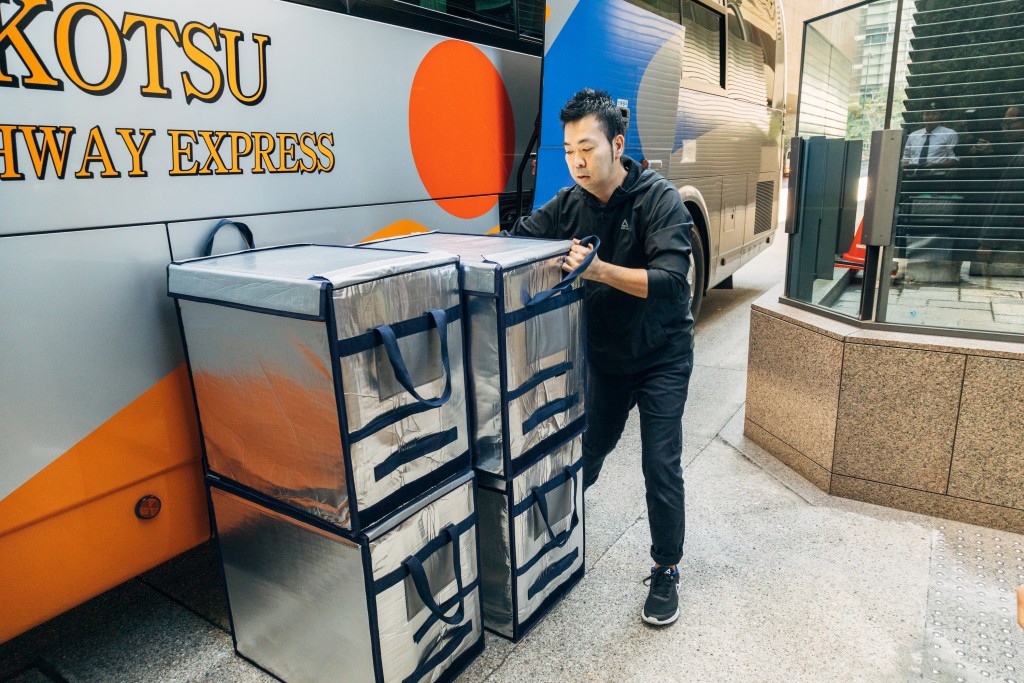 The percentage of consolidated carriers who load cargo on passenger transport vehicles is on the rise, especially among businesses that own railways and cars. In June 2019, the JR East Japan Group conducted a verification test of fresh fish transport involving the transport of seafood on the Shinkansen. The most glaring reason for this phenomenon is the growing shortage of specialized carriers and the social impacts of it in reducing transportation costs. So without transport, how did Mr. Izumikawa connect producers, shippers and consumers in this project?
Mr. Izumikawa said, “The awareness that we, producers, and shipping companies share the same problem has facilitated smooth cooperation between the relevant companies. When we first floated this idea with the bus operator, we received a very positive response. I went to the production area myself for a face-to-face meeting with the producers, and I communicated our desire to bring the project to life, and we also carefully explored what we could sell at the market. Regular interactions with customers were impossible, so, to best present the foods that would be the ‘face’ of the producers, we created point-of-sale displays with easy-to-understand information. This was an effort to build a trusting relationship with consumers by providing them with not only things, but also intangible benefits. By the way, did you know that there is a time lag of about 24 hours before mackerel and sardines caught in Choshi and sold in the Tokyo metropolitan area? Unlike most distributors, whose fast deliveries have time limits, we can provide food to the consumer’s table the day it is harvested. The freshness alone makes the quality totally different. So naturally having both marketing and promotions functions is also a benefit of combined transportation.”

Breaking through the status quo is not enough; negotiations with third parties such as national and local governments are also important. 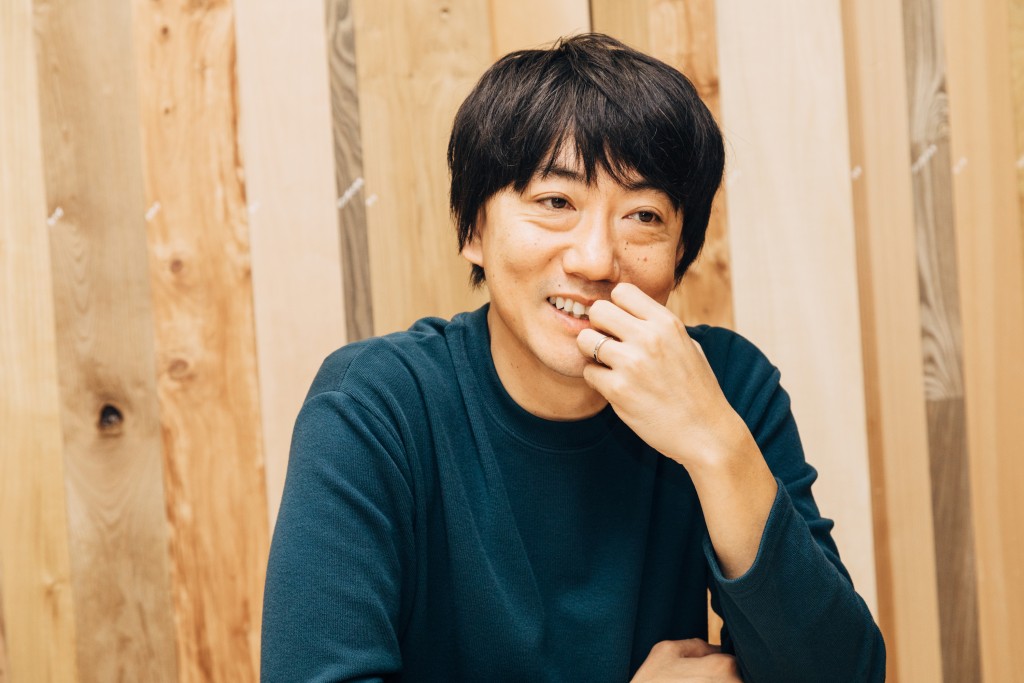 Looking at the big picture, the cooperation with the players involved in the project went relatively smooth, but a closer look reveal several small bumps in the road. There were a lot of trial and errors, especially at the beginning. Some examples include mushrooms arriving rotten, oversized vegetables that proved difficult to sell to the general consumer, and having to rush to develop new equipment needed for transportation. However, creating a physical distribution system involving a separate third-party organization caused difficulties of a different type altogether.
Izumikawa said, “Constructing a receiving route in a metropolitan area is a bit difficult. About20% to 25% of the total is delivered to the Daimaruyu area, but some vehicles find it difficult and burdensome to come to the Daimaruyu area due to their travel routes. Therefore, in order to explore other options, I consulted with the Tokyo National Highway Office (under the jurisdiction of the Ministry of Land, Infrastructure, Transport and Tourism), which manages the Shinjuku Expressway Bus Terminal. Initially I didn’t make any headway. There are other receiving points besides Shinjuku, but these are somewhat inconvenient in terms of transport. I spent much time negotiating and coordinating with the authorities to see if there was a better way to receive product.”
Breaking the status quo is very difficult. With this in mind, Izumikawa repeatedly approached local authorities and local government representatives with whom he worked on the project.
Izumikawa said, “I think our approach in addition to only for-profit businesses like mine, involved local government, played an important role in winning over the local authorities. I sought to push for greater consumption in the production area, so negotiating with local government led to very satisfactory results. While still engaged in negotiations, we received permission to conduct a verification test of the single delivery system. This helped provide a solid understanding of how safe and efficient the system was, and also helped us to create an even better set-up. 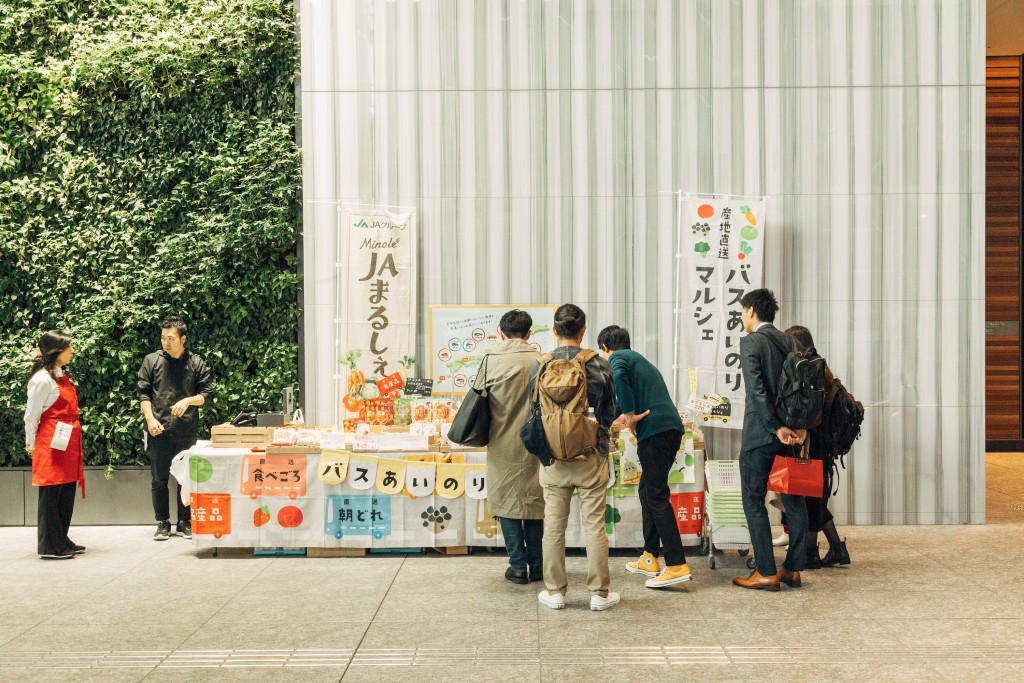 Now there are more and more loyal customers, mostly businessmen, looking forward to the day’s lineup at the Bus Ainori Marche. There are also some who make a special trip here to buy fresh fruit for special occasions. With regards to this project – a new spot is gradually spreading throughout the Daimaruyu area. I asked Mr. Izumikawa to take us on a journey on how people became involved and how the scale of the project was determined.
Mr. Izumikawa said, “Agriculture and bus operators, for better or worse, still work with traditional systems. This is precisely why so much energy is required to force change on their own. In some cases, it seems better to have outsiders come in and coordinate relationships within the industry. It is important to think about the benefits for everyone when working to come up with ideas. Ideas are not born out of a void. Rather than pinpointing what everyone’s goals are and what you yourself hope to achieve, we should be trying to take in the information that surrounds us, even across industries. I think it is important to turn knowledge and information into wisdom. You can’t create wisdom with a lack of knowledge.”
I was also quite impressed by the relationship between Mr. Izumikawa and the staff at the delivery site. Neither overbearing nor too distant, Mr. Izumikawa displayed total trust in the on-site staff. For its part, the staff responded to Mr. Izumikawa positively, displaying an unwavering sense of responsibility and willingness to do the job right. I witnessed communication built on trust that was in turn based on reliable teamwork and mutual respect.
Mr. Izumikawa said, “When launching a new project, the members who will be working on the site are the most important component. With new challenges come new problems and renewed awareness, and we have to make up the rules as we go along. Naturally, you have to strike the right balance. I believe that the most important thing in this regard is the ability of on-site members to respond to a different situations from a variety of perspectives. The next most important thing is being proactive. If anything, in providing support, there has be a push to get things done when communicating with staff. With this project, it was often the case that we learned from our failures, but recently things have been going well. It has been a pleasure to recognize everyone’s efforts.”

・Utilizing idle space on long-distance buses to transport freight and people together, the ‘consolidated transportation approach was born out of an awareness about the challenges of having an unworkable physical distribution network.
・For the individual, [the key to] smooth deployment is marshaling positive factors to break through the status quo.
・Overtures to the Tokyo National Highway Office, which is under the jurisdiction of the Ministry of Land, Infrastructure, Transport and Tourism, were successful because this approach involved local government as well as businesses.
・Members who build and work on the site are the most important component in launching a new project.