TOP > Article > High-precision (94%) prediction of the amount of waste generated and 57% reduction in work time. What is open innovation, which addresses CaaS (the concept that the whole city is part of a service)?
SHARE
TO TOP 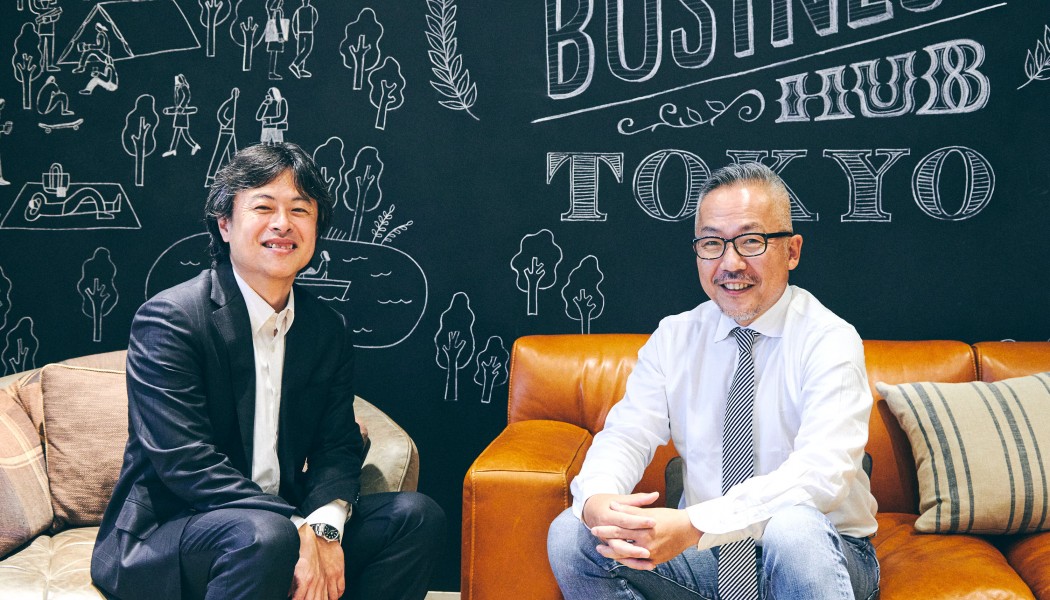 High-precision (94%) prediction of the amount of waste generated and 57% reduction in work time. What is open innovation, which addresses CaaS (the concept that the whole city is part of a service)?

City as a Service (CaaS) assumes that the entire city is a single service space. CaaS aims to achieve optimal conditions for individual services. One of its concrete challenges is waste collection in Marunouchi, which has been an issue for over 20 years. However, in a January 2020 demonstrative experiment using Magellan Blocks, the world’s only cloud platform equipped with AI and quantum computing, we confirmed the possibility of optimizing the total distance traveled, the number of collection vehicles required, and the reduction of the total working hours by about 57%. Based on this demonstrative experiment, which is expected to yield further results in the future, we spoke about the possibilities of this technology and the factors for success with Saishu Hidehiro, President and CEO of Groovenauts, and Okuyama Hiroyuki, who is in charge of the Mitsubishi Estate. 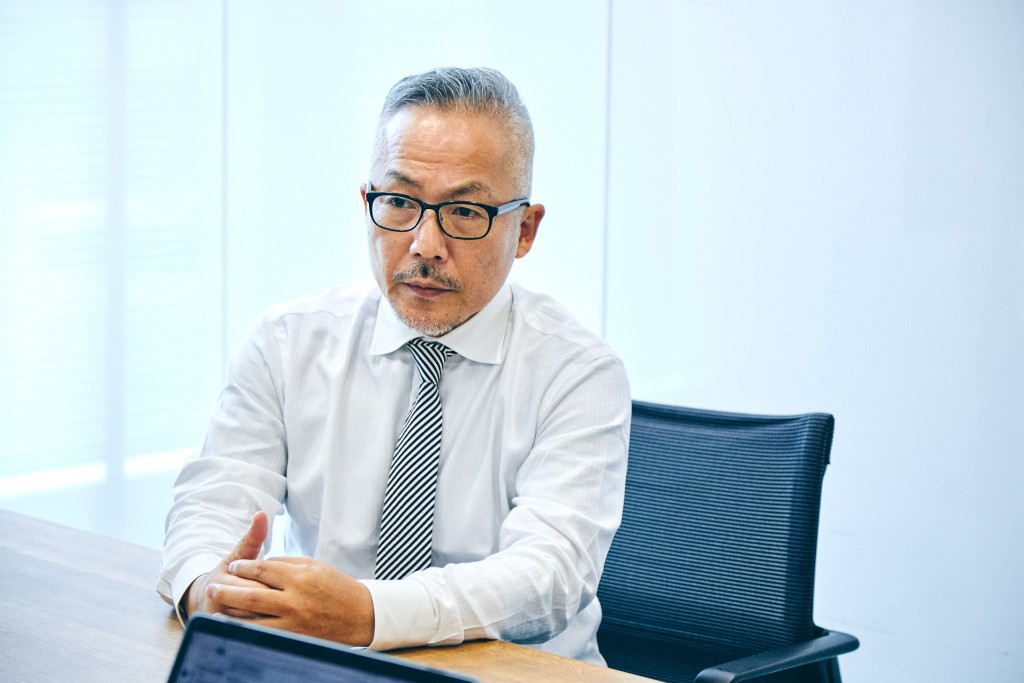 Saishu Hidehiro
After graduating from Waseda University’s School of Letters, Arts, and Sciences, Saishu worked as a regional redevelopment consultant before becoming a network engineer. He engaged in product development for Apple (USA) and subsequently was involved in the development of many products. In 1998, he founded a venture company that was listed on the JASDAQ three years later. After 13 years, the company’s management was bought out. He was appointed President and CEO of Groovenauts, Inc. In 2019, he succeeded in commercializing quantum computers, a first in the world. In order to democratize machine learning and quantum computing, he is promoting the “Magellan Blocks” business. 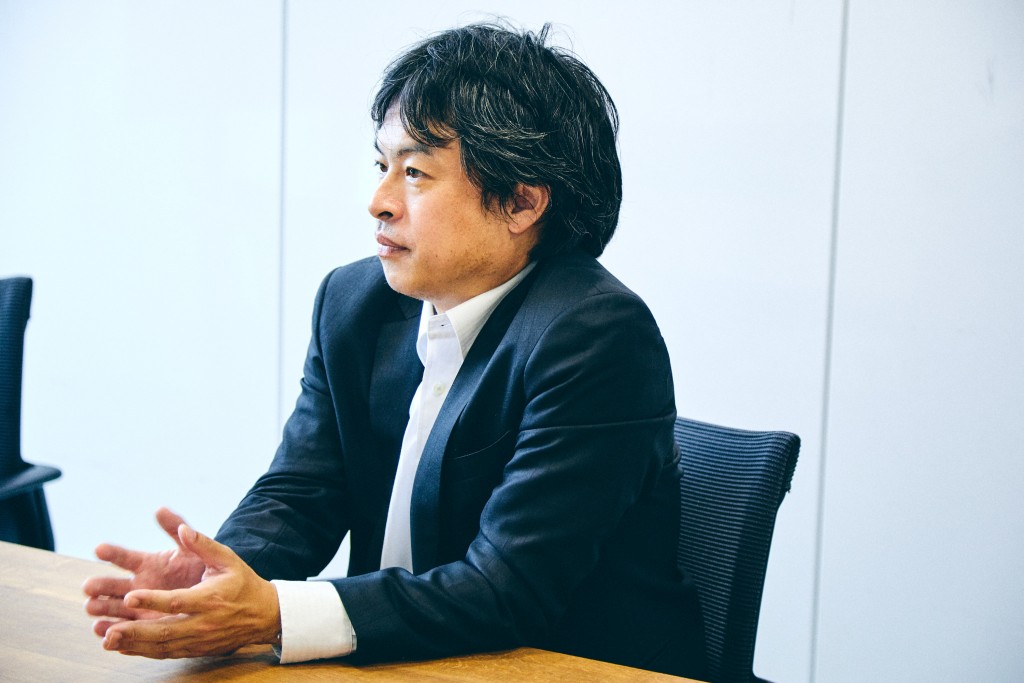 Okuyama Hiroyuki
In 1999, he graduated from the University of Tokyo, and in 2001, after completing the university’s graduate program, he joined an energy company. In 2012, after having mainly engaged in the formulation and development of specifications for energy equipment, he joined Mitsubishi Estate Co., Ltd. Since then, he has been using the latest technologies (such as AI, IoT, and robotics) to implement energy-saving measures in office buildings and in the urban development. 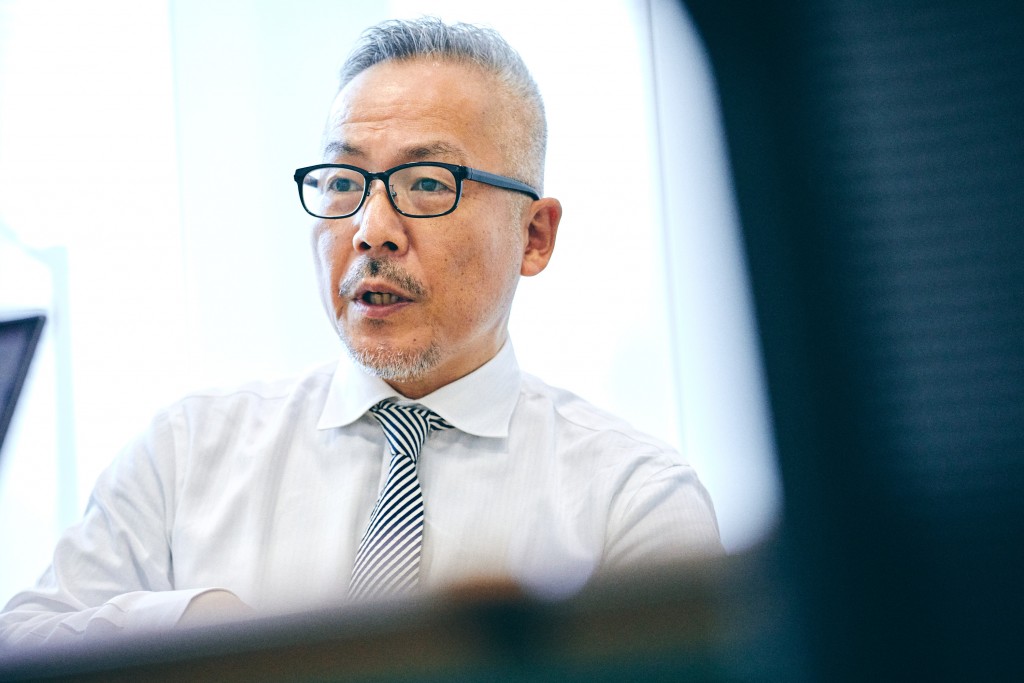 ――Please tell us about the mechanism behind the Magellan Blocks cloud platform, which is unique in the global market and was used in the open innovation case of Mitsubishi Estate and Groovenauts?

Saishu： It is a cloud platform that leverages AI and quantum computing to allow users to collect and analyze data scattered across different locations, to predict the future using our independently developed deep learning model, and to optimize their business with the latest quantum computing models. If we were to express the characteristics of Magellan Blocks simply, we would say that it provides a variety of mathematical models to solve complex problems in the real world. So far, I think that computer systems have been written so that they can define, using the language called programming, what has been defined as the requirements. The written program is executed as such, but as the phenomena in the world have become more complicated and diversified, this method doesn’t work anymore. First, a complex intertwined event is resolved into factors and solved by a combination of mathematical models to simplify and express the characteristics of the problem. The role of Magellan Blocks is to interpret the theme, find valid perspectives from the data, and organize information to provide hints that lead to solutions. This makes it possible for humans to make hypotheses based on the visualized grounds and take necessary steps.

――Specifically, what does this mean?

Saishu： In fact, it is very difficult to predict the behavior of each human being but, if you collect a certain volume of data, you can see relatively simple laws of physics. In the past, we could use stereotypes, such as men in their 20s are like this and women in their 30s are like that, but modern times require classifications with higher resolution. Changes are in line with the increasing complexity and diversity of society. Technologies like deep learning and quantum computing can successfully find these things that are like the laws of physics and can excel at solving multivariate and nonlinear challenges. The fact is that we can leverage these tools to solve the social problems we face today.

Companies Don’t Know Their Own Challenges 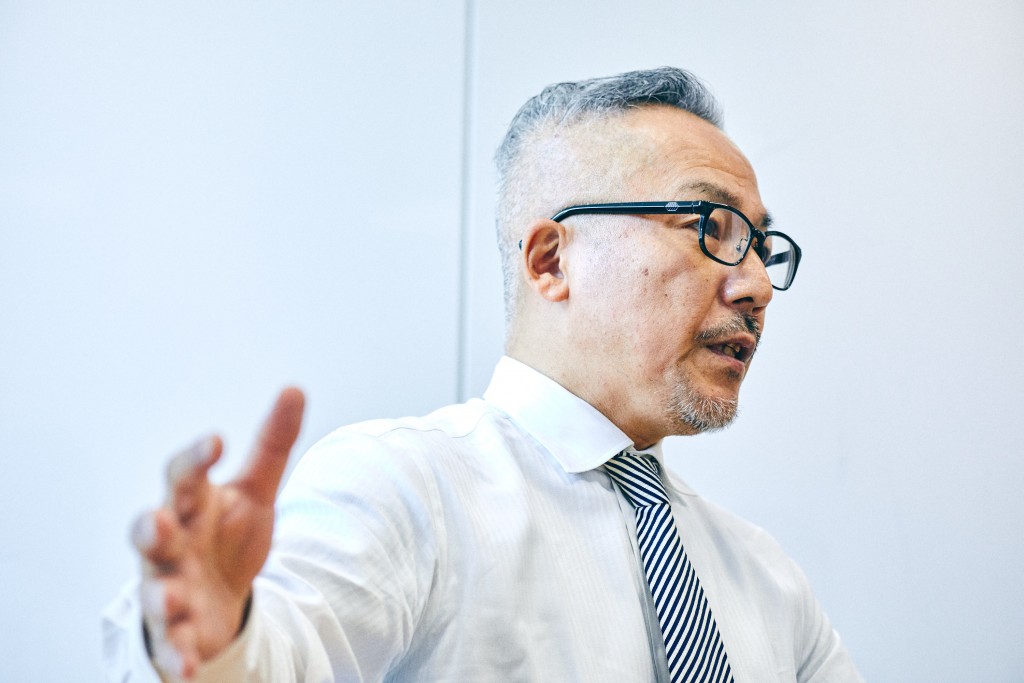 ――Please tell us about its use in City as a Service (CaaS), which aims to create a comfortable, rich city, full of humanity.

Saishu：Before we began this effort, we were often involved in projects to forecast demand (in other words, things like forecasting sales, numbers of customers, and numbers of orders). However, eventually, only knowing about your own stores and products is limiting. When you go shopping, you don’t buy only a particular product at a particular store, right? So, I came to the idea that we must have a perspective that includes the whole town. Using the example of demand forecasting above, it is important to understand not only what is happening within our own stores, but also externally (such as “how many people walk past the store” and “what is selling well throughout the region”).

――Given the context of smart cities, we could mention the use of Bluetooth and sensing devices, which enable us to review data analysis points of view instead.

Saishu：Yes. We’ve been analyzing data for a long time, so I know that using the system you mentioned is not the right answer. The reason is that deeply reading the data that each company currently owns gives a rather realistic understanding of the state of the city. There are actually people who want to return this data globally, as something of value in some form. If this is the case, I thought it would be better to create a system in which we raise the concept of a city as a service space and collect all the data we need. We can think about a service in which people prioritize personal comfort, rather than just creating a rational urban space. 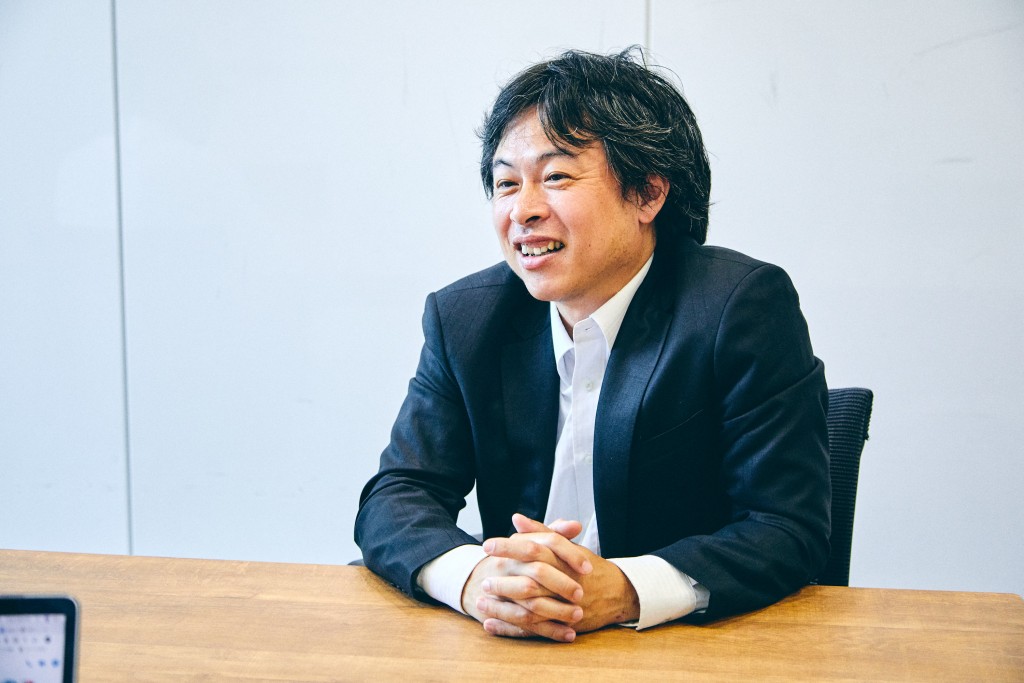 ――Among other demands, you started with the problem of garbage in Marunouchi. Why this topic?

Okuyama：In Marunouchi, an enormous amount of garbage is produced every day. For about 20 years, we have sought solutions to reduce traffic congestion (due to a reduction in the number of garbage collection vehicles) and CO₂ throughout the city. Nevertheless, the topic was difficult and we had not reached a solution for a long time.
Actually, when I called on Mr. Saishu, I was thinking, “I’d like to solve the waste problem somehow. If we use AI or quantum computers, we should be able to do something.” To be honest, we clearly didn’t fully understand the challenge, either.

Saishu：Many companies, not just Mitsubishi Estate, are now becoming less aware of their own challenges. Conversely, this time too, we tried working backwards from the conclusion. We said we must tackle this from the viewpoint of the city, so let’s do it.
The reason we started working on the garbage problem was not only the reduction percentage, but also that Mr. Okuyama and his team’s awareness of the problem was quite clear. After all, technology is just mimicking human judgment. That is why the intuitive feelings of people with problem awareness and professionals on the ground are highly informative. Isn’t it? When people have little awareness of the issues, we end up talking at cross-purposes, even as we interact with each other. If we are stuck on questions like “Why are we doing this? What will we do once we solve this?” it will be quite a deadlock. 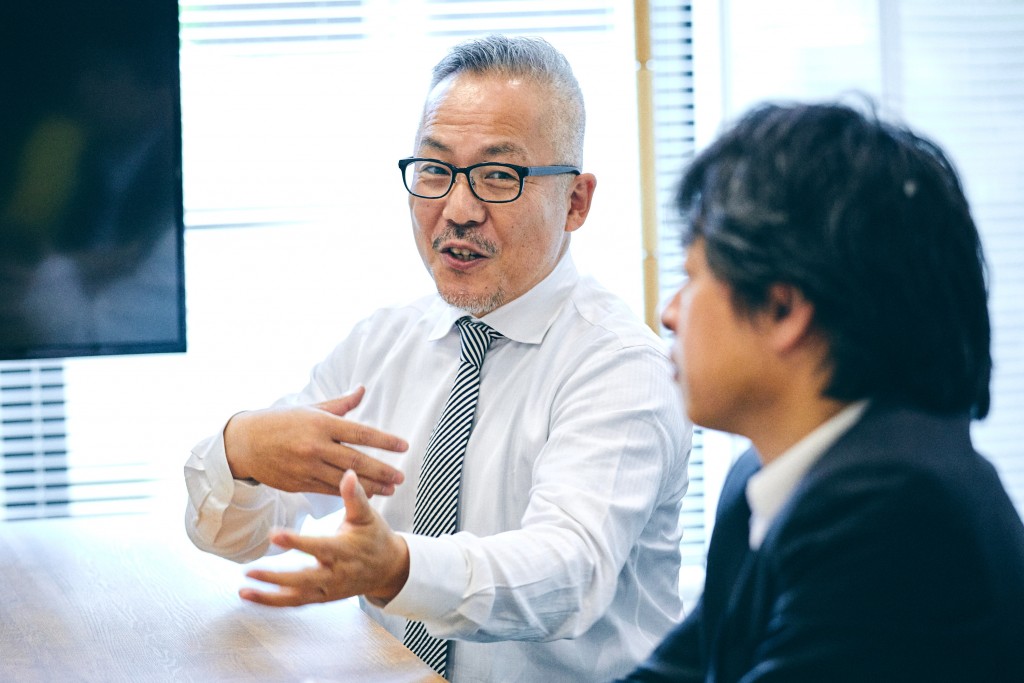 Saishu：And another thing, this was very easy to do because Mitsubishi Estate stored the data and records carefully. It is important that we have something to look back on to see what has happened in the past. We didn’t use them this time, but there were records from 10 years ago.

Be Aware of the Partner’s Timeline and Workflow

――Having a problem-conscious mindset and having usable data was advantageous for utilizing Magellan Blocks and thus useful for AI and quantum computing. Regarding one another’s point of view, is there anything you have been careful about while consciously considering open innovation?

Okuyama：I guess, if you want to do it, you should proceed quickly, before the parties’ passion fades. If you’re going to do it, do it, and adjust in that direction. Our departments are comparatively willing to engage in new businesses and we want to build teams with vigorous companies. So, we tried to move the approval process forward as soon as possible.

Saishu：Thank you. I already understand that when I work with a large company, the discussion will not proceed linearly. If I had to describe it, I would say imagine a quadratic curve. I can’t jump two steps ahead suddenly to move the project forward. For a while after launch, I don’t know if it’s going or not. What is important, though, is that sometimes it may begin to proceed suddenly. Working in a linear fashion will fail. I mean, defining the requirements, then programming them, will fail. That’s why I think it’s important that we realize this structural aspect, while thinking in ways that are more flexible.

――Thank you very much. Last, could you share future developments that cities and societies should anticipate from the CaaS perspective?

Okuyama： In brief, it should become “a more enjoyable city where the whole city is focused on individuals.” AI will be used in areas that cannot be seen. More things can be done, such as not waiting, not lining up, and not getting lost.
In order to manifest such a city, I think it is important to try a variety of things that are easy and worthwhile to fix, like the garbage problem.

Saishu： If we pursue CaaS, we will lose sight of more mechanical and computerized things. We will improve the world in which people live. This is the ubiquitous world that has been discussed before. Rather than being more sophisticated, data needs only to be linked. However, I somehow believe that it would become a society that pursues spiritual fulfillment rather than material satisfaction, where people can possess individuality in a comprehensive manner.

・ The characteristic of Magellan Blocks is that they provide a variety of mathematical models to solve real-world complex problems.
・ I thought it would be better to create a system in which we think about how a service can be prioritized to bring comfort.
・ Technology is just mimicking human judgment. We need to be aware of the challenges that presents.
・ It is important for open innovation to progress quickly before the parties’ passion fades.
・ When working with a large company, discussions do not proceed linearly.
・ In the future, we should become a society that pursues spiritual fulfillment rather than material satisfaction.