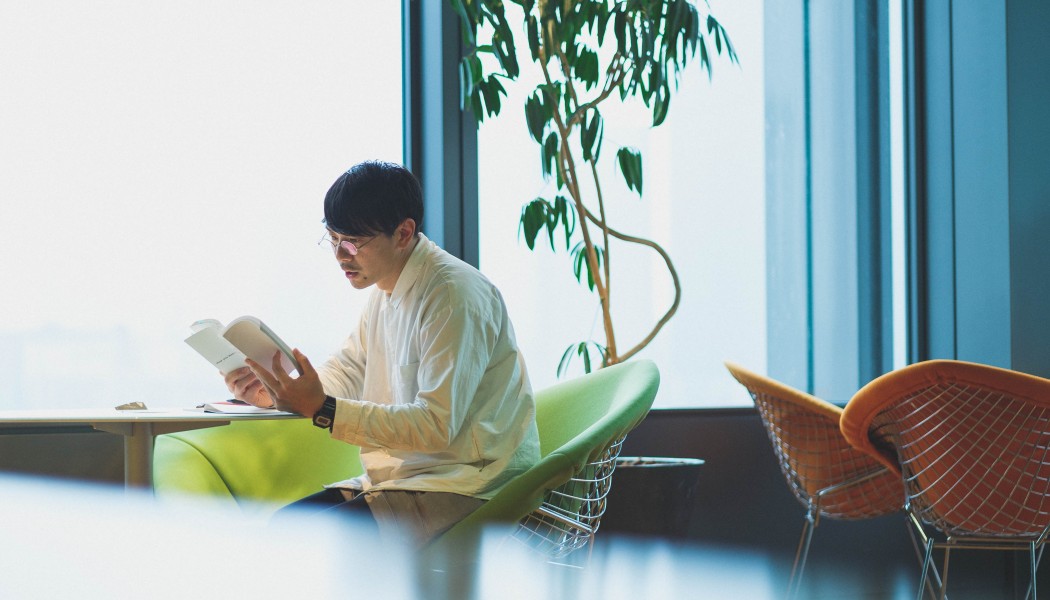 Using Be Title at Work: How Demanding Assignments Allow Managers to Encourage Growth

With diversification of work styles and employment patterns there is a growing realization among full-time and part-time employees, freelancers and entrepreneurs that they should strive to ‘express our real selves’ in their work.

However, that is easier said than done. Often some find it difficult to figure out how to implement it in their jobs and their managers may also struggle with giving them the right advice. Increasingly leading companies are taking part in a workshop called Be Title workshop which addresses this issue. Professionals, ranging from new employees to managers, are using the workshop to improve their performance at work.

We talked to Yoshihiro Kanematsu, founder of Be Title, about the workshop and how it helps in improving communication with subordinates.

・Something a friend casually said to me sparked the research for the workshop. Others’ observations helped me find my identity.
・Find your true self and get to work. We, at Be Title, believe, that finding your purpose in life is the key to personal growth.
・Demanding assignments can help the subordinates grow. Three questions drive the effectiveness of demanding assignments.
.Main points 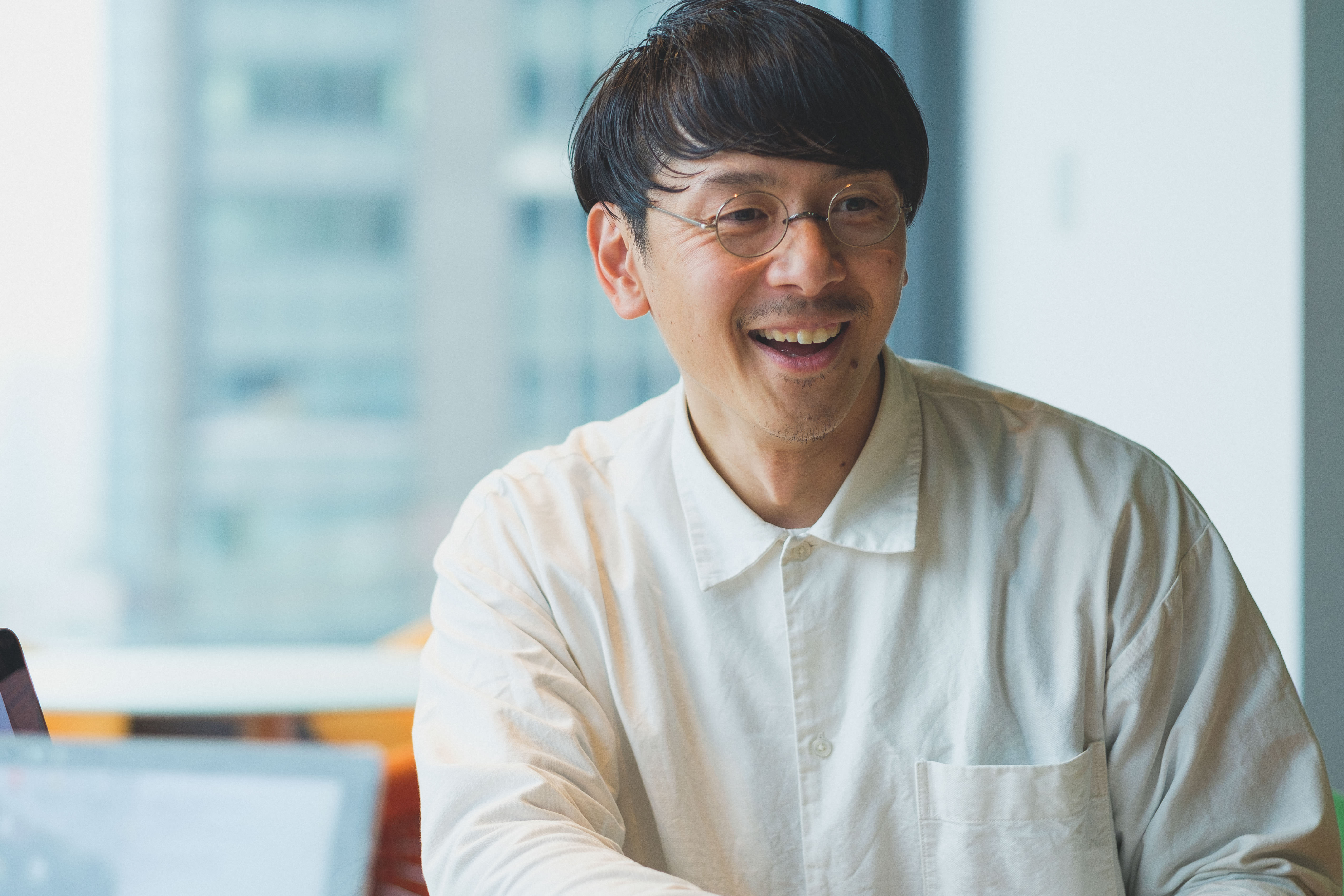 Yoshihiro Kanematsu
Researcher and Specially Appointed Lecturer at Kyoto Seika University’s Faculty of Humanities.
Born in 1979 in Akita, Yoshihiro Kanematsu started working with an NPO as a web designer where he interviewed a series of designers around the world for his work, ‘Can Design Change the World?’. After that, Kanematsu was involved in the launch of greenz.jp, where he worked as the editor-in-chief from 2010 to 2015. Thereafter he has worked as a freelance scholar, and he is now a special lecturer at the Kyoto Seika University where he develops social design education programs. His published work include The Be Title and Social Design, as well as series such as The Sky, the Sea and Social Design and Recipes for Learning. He currently lives in Kyoto and has one child.

Something a friend casually said to me sparked the search for my Be Title. The others’ observations helped me find my identity. 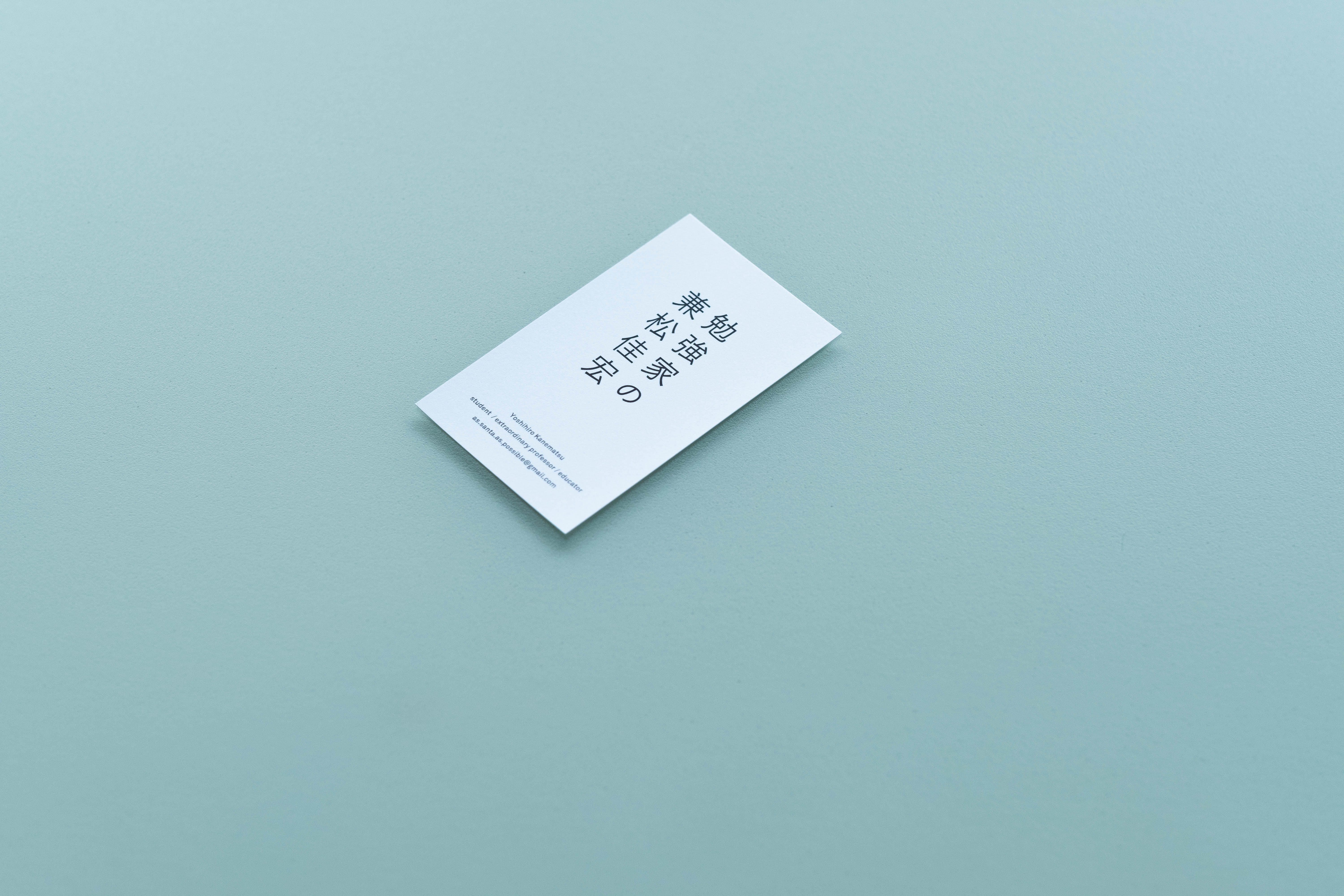 Kanematsu calls himself a student and this is his Be Title.
While it is common for one to have a Do Title which refers to occupation, Kanematsu promotes the idea of Be Titles, which helps in understanding the kind of person one wants to become.. He argues that finding one’s Be Title makes it possible to “be comfortable in one’s skin.”

Among the many books and seminars devoted to self-discovery, one of the hallmarks of the Be Title workshop is its emphasis on asking others’ help. Mr. Kanematsu feels that people tend to overestimate or underestimate themselves, making it difficult to achieve self-discovery on their own.. He says that by asking others to give one’s self a Be Title, people are able to discovery their true selves.. At the workshop, participants receive cards with their Be Titles which are given to them by others. They are always surprised by how different these are from the titles they would have selected for themselves.

Mr. Kanematsu said, “Participants don’t have to accept all the titles given to them by others. They are free to select only those that fit according to them.. The titles that others come up with simply gives the participant more choices. The final decision on whether to adopt a title is the individual’s to make.

Therefore, the question of whom to work with in the workshop is of paramount importance. Therefore I don’t recommend conducting these workshops with colleagues or classmates who don’t know you well. Working with someone you are close to and who won’t judge help in will help infinding your true self. In the long run. 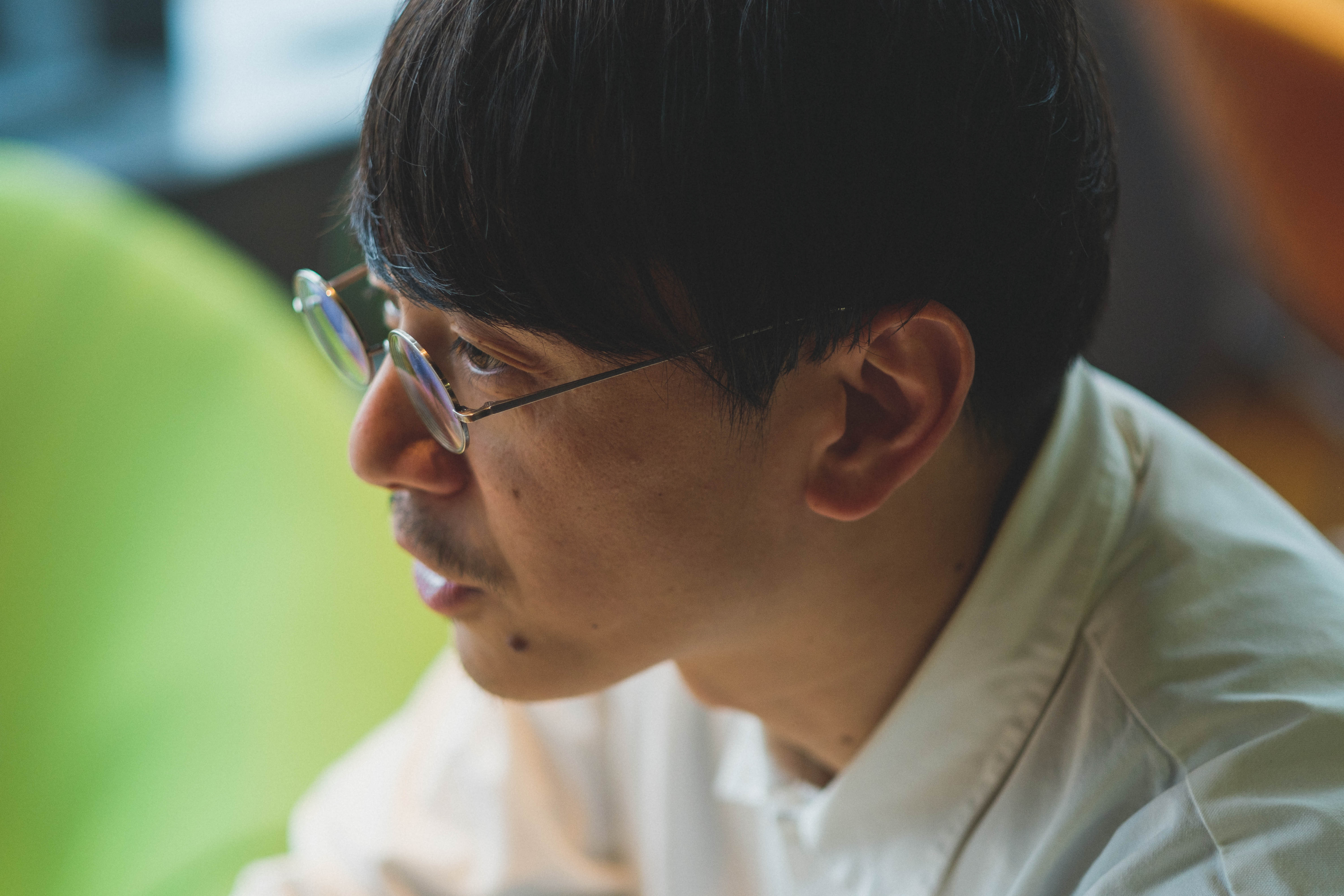 Mr. Kanematsu says that the reason he gave himself the title of a student be cause is the is related to the difficulties he had faced in his twenties. Enrolled in his university’s French Literature Department, which he had applied to as a backup in case he didn’t get into his preferred program of study, Mr. Kanematsu became more interested in web design – which he was exposed to through a part-time job – than studying literature, which was of little interest to him at the time. After graduating, he got a job as a web designer but his desire to not lose his status as a liberal arts student combined with his interests and a longing for a more notable title led him to repeatedly take on new, more impressive-sounding job titles, such as Contents Director and Green Journalist during his 20s.

However, as he reached the end of his twenties, it occurred to him that he really needed to figure out what he wanted to do. Even though his job was good, it didn’t hold any semblance to these titles, which were Do Title, not Be Title. Around this time, a friend noticed how absorbed Mr. Kanematsu was in his interests and told him that the word student really applied to him. Having found his identity at 30, Mr. Kanematsu began to include the title ‘student’ in his profile.

Mr. Kanematsu said, “Until then, I was obsessed with having a Do Title, but having learned my Be Title, I was able to move on. As long as one is true to their Be Title, then they can have any Do Titles they want. The words of a friend helped me to find my identity and and my desire to share that experience with others led me to start this workshop.” 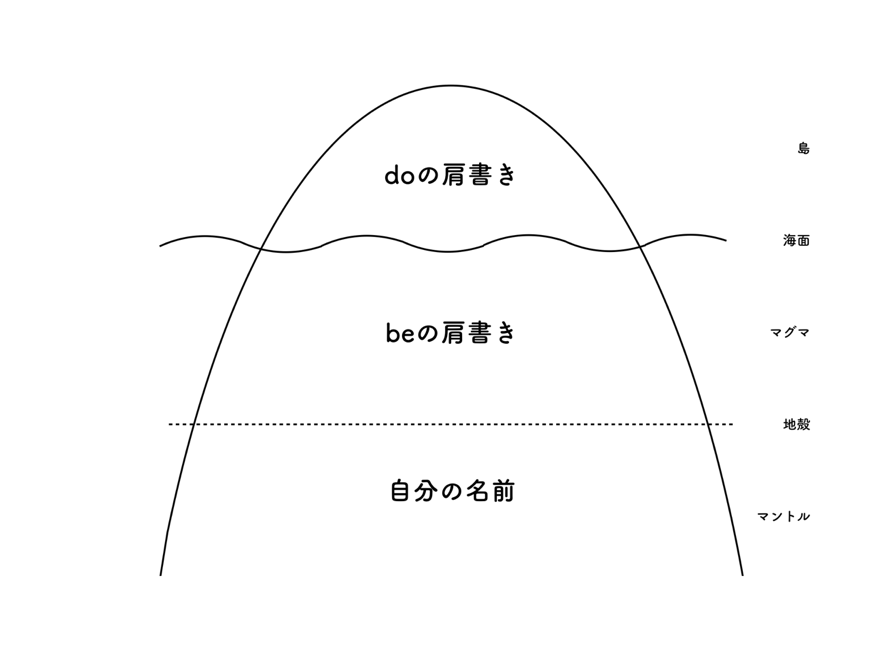 Find your true self and then get to work! Finding your purpose in life is the key to personal growth at Be Title workshop. 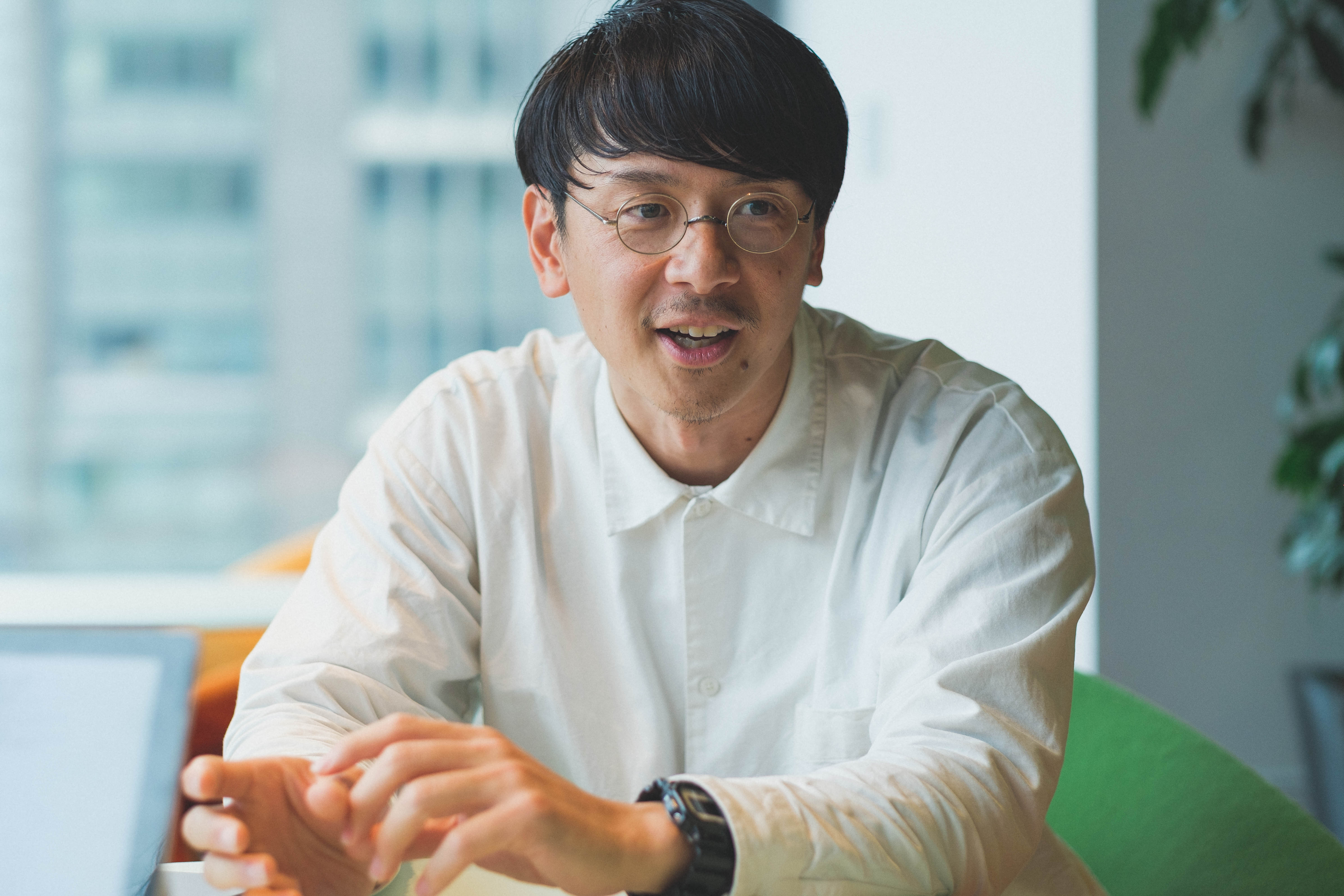 As he continued to hold these Be Title workshops, Mr. Kanematsu began to notice a problem. After discovering their Be Titles, some participants stopped engaging in Do activities and some even quit or changed their jobs. Although he was very grateful to have found his identity, he began to feel uncomfortable with the misinterpretation of the original message of “using one’s Be Title as the magma underlying his or her Do Title.”

Mr. Kanematsu said, “Be can only be extracted with sufficient Do. Without sufficient Do, one cannot find his or her Be. In other words, the person stops growing. Ideally, the individual searches for things to that can help in discovering his or her identify. This leads to the discovery of an even bigger identity. You cannot be satisfied with merely finding your Be; you have to have both Be and Do to grow as a person.”

To tackle this problem, Mr. Kanematsu ensured that Be Title included both purpose and identity. It constituted a description of the current state of the person’s headspace; i.e., “I am a … person.” The original Be Title that he proposed involved the discovery of this identity.

Similar to the idea that I create the future I want by making the most of myself, the newly discovered purpose involves the idea of making the world better. In other words, the individual has to use his or her identity to discover what role to play at his or her company and in society at large.

For example, thinking about ‘what it would be like to be in charge of something’ may be a first step in finding a purpose for one’s Be Title. Some possibilities would be‘E-TV’ for turning any academic material into something interesting, or a ‘Black Hole’ for absorbing any worries. The purpose here is to describe what kind of contribution one will make to society.

Mr. Kanematsu said, “The Be Title was originally created as a workshop for project launches. Purpose, which indicates how one is to contribute to one’s surroundings, is more suitable for projects than identity, which merely describes the current state of the individual’s. While identity is certainly important, for corporate training and related activities, we hold purpose workshops to enable students to contribute to their organizations after returning to work.” 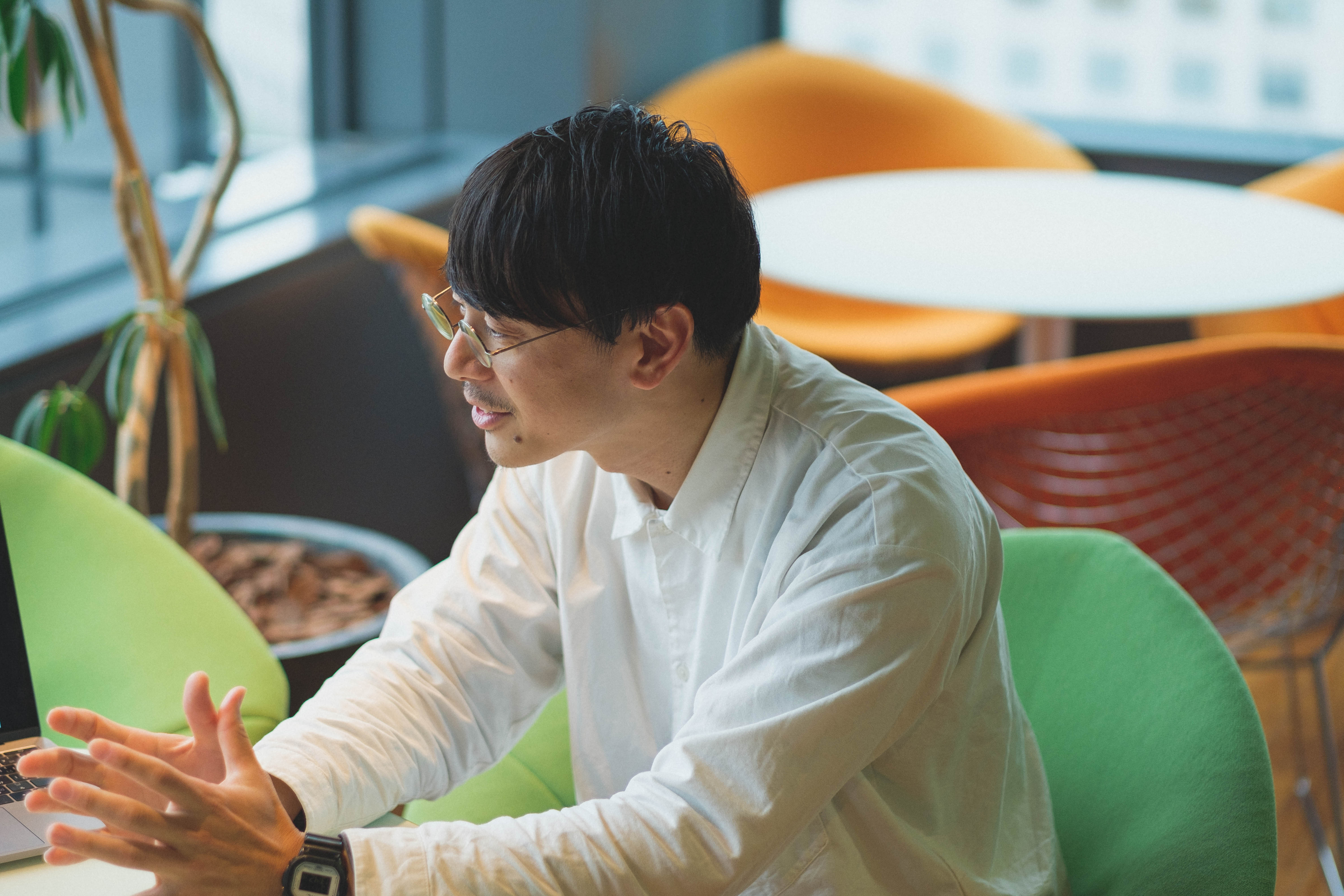 1. What do people around you say you’re good at, even if it’s something you might not have ever noticed?

To provide an appropriate demanding assignment, the manager must know what the subordinate is good at. However, this person might not have a good grasp of his or her strengths, as doing something effortlessly that others struggle with. While a demonstration of real ability, may not come to the attention of the subordinate him or herself. An effective way to get to know your subordinates’ specific strength is to figure out what others praise them about, even if this is something they’ve never given much thought to.

Discuss with your subordinate something he or she could teach others if he or she were to be in charge of an in-house training session. Anything is fine, even if it seems trivial or unrelated to work.

3. Ask the subordinate whether the task was easy or difficult.

Asking a subordinate to complete a task is easy, but which the subordinate who would struggle, may end up being trying for both of you. Having them explain what they’ve overcome and how difficult it was for them should help you figure out what kind of demanding assignments they can handle.

Mr. Kanematsu said,: “Giving a demanding assignment is not too difficult but it means being attentive to his or her Be Title. While doing this, you’ll want to carefully consider what he or she likes doing. In the same way, if you can understand him or her and provide a demanding assignment that is not innocuous, you have what it takes to help your subordinates grow.”

Finally, I asked Mr. Kanematsu if there were any Be Title tasks that were appropriate for the individual to tackle alone. He said that there was one such task and that it was best done at the end of the year. He advised dividing the past year into quarters, and noting what one was pleased with and what he or she found of little use. Then, looking back at this, think of the upcoming year as a book, and give each quarter a chapter title. Doing this, it should be plain what ties together the four titles, with a Be Title symbolizing the upcoming year emerging.

Mr. Kanematsu, “This is work that can be done individually, but, if possible, I’d advise that you share with trusted seniors and colleagues what the past year was like. Such conversations might normally be difficult but one should make it a point to spend the end of the year doing this to prepare for the next year. It would please me very much to hear that these efforts helped people better enjoy their careers.”

・One of the hallmarks of the Be Title workshop is getting help from others.
・Participants don’t have to accept all the titles given to them by others; they are free to select only those that they feel fits them. ・As long as one is true to his or her Be Title, any Do Title will work.
・Without sufficient Do, one cannot find his or her Be.
・This newly-discovered Be Title purpose involves the idea of how to provide the best help to others.
・In utilizing the Be Title concept in management, the idea of demanding assignment is key.