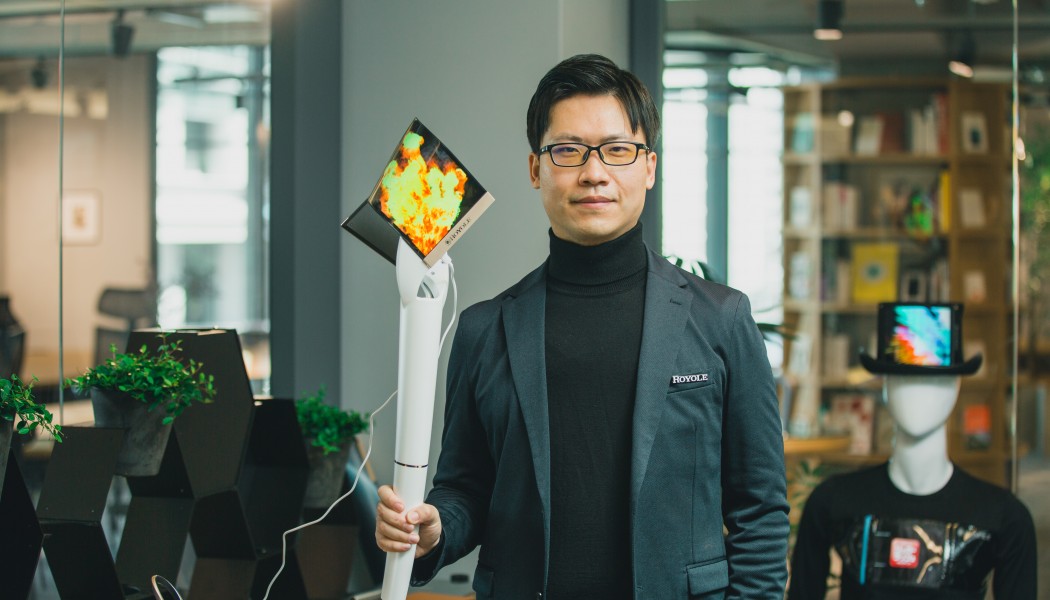 Royole, developer of foldable smartphones, comes to Japan to work with Japanese content

Monitor displays are flooding our world, so much so that there is probably not a day when we do not see a single display. Smartphones, personal computers, televisions, and huge outdoor screens are all around us.
However, when we stop to think about it, we rarely see displays that are not flat. In fact, almost all the displays we see around us are designed to have a flat surface.
Yet, a startup company is challenging the conventionally held notion that displays must have a flat surface. Enter Royole, a startup based in China.
The company, which was established in 2012, has garnered worldwide attention after it developed a 0.01mm flexible display, the first of its kind. Recently, Louis Vuitton launched a line of handbags with built-in displays in collaboration with Royole, giving the company a further publicity boost.
In January of this year, Royole established a subsidiary in Japan, the company’s third operational base after the U.S. and China. Royole wants to create new products using Japanese technology. We interviewed Gao Long, general manager of Royole Japan, and asked him about the potentiality of flexible displays and the type of society he wants to help create.

・Curved lines are in the sphere of God; Royole’s technology sped up the evolution of displays by several decades
・Curved lines of all kinds lead to business opportunities; Royole’s six areas of emphasis
・Technology and content draw Royole to Japan
・Key points 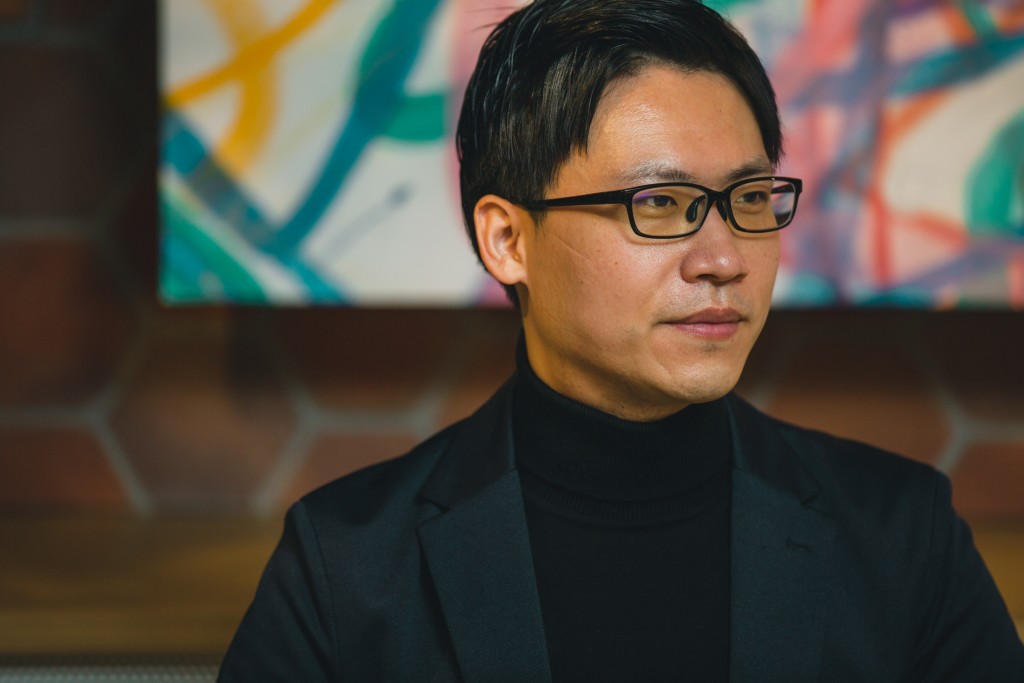 Gao Long
Royole Japan, general manager
Gao moved to Japan in 2008. He worked in system development at major companies such as Hitachi, NEC, and Toshiba. In 2014, he joined China Telecom, the largest fixed-line telecommunications company in China, and served as the account manager at the company’s Japan office.
In 2019, Gao joined Royole as the head of the company’s Japan operations.

Curved lines are in the sphere of God; Royole’s technology sped up the evolution of displays by several decades 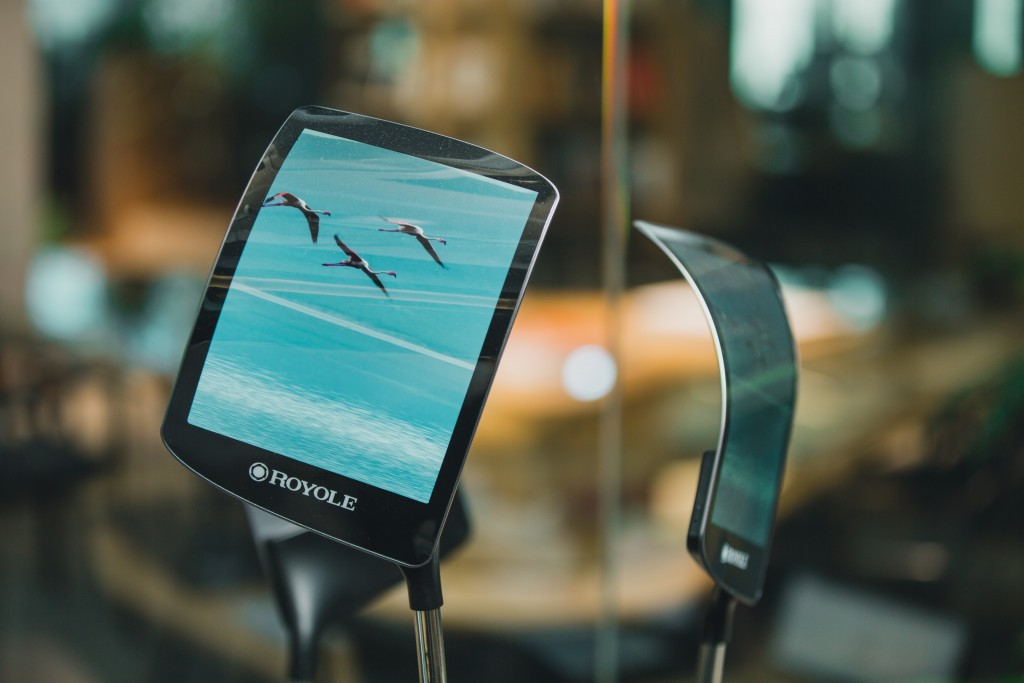 Many futuristic products were on display when we visited the Royole office. Gao showed us some of these products.
The first item was an ultra-thin electronic-paper keyboard. The keyboard comes out of a container cylinder when in use, and it is
rolled up again when done. It is a valuable tool for people on the go because it can be connected to a smartphone or a tablet with Bluetooth.

He then showed us RoWrite, an electronic notebook. The user places a regular piece of paper on the notepad and writes with a dedicated pen. The handwritten content is digitally recorded, and it can be viewed on a smartphone or PC. RoWrite not only captures the written content itself but also reproduces the writer’s every stroke and the writing speed. The content can be edited later, and the color can be changed. This product may be useful for jotting down ideas or drawing pictures.

On March 25, the company made an online announcement on the release of FlexPai 2, a foldable smartphone.

Gao, who is very eager to show off Royole products, is actually a new recruit; he joined the company just last year. However, he is an avid Royole fan who has been using the company’s products for many years. In 2015, he talked with CEO Bill Liu about establishing a Japanese subsidiary. That dream has finally come true. 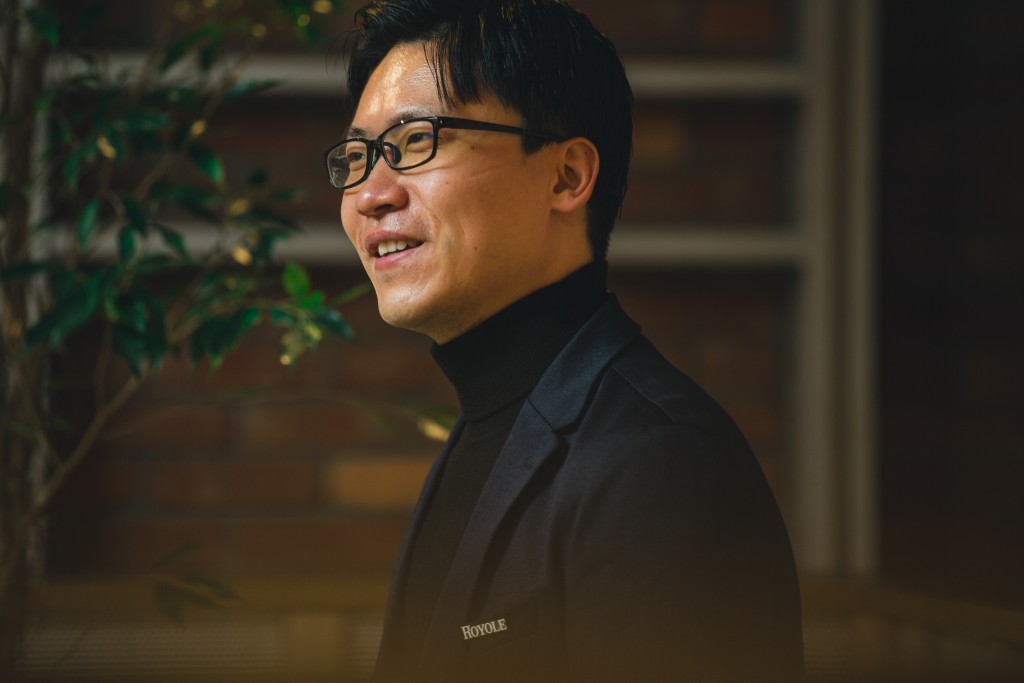 Gao, an employee and a long-time fan, discusses Royole’s greatness.

Gao：The flexible display is an idea that CEO Bill Liu came up with while he was in a doctoral program at Standard University.
He believed that a display that could be folded and bent in various different ways would have a great impact on society. So, he set out to develop such a device. Experts said that his idea would be very difficult to achieve – so difficult that it would be like constructing a building on tofu. They said that it would take at least 30 years to mass-produce such a product. However, Liu developed the display in a matter of several years and succeeded in commercializing the product.
Liu turned his idea into reality very quickly even though experts had predicted that the process would take a few decades. This was made possible by two core technologies. 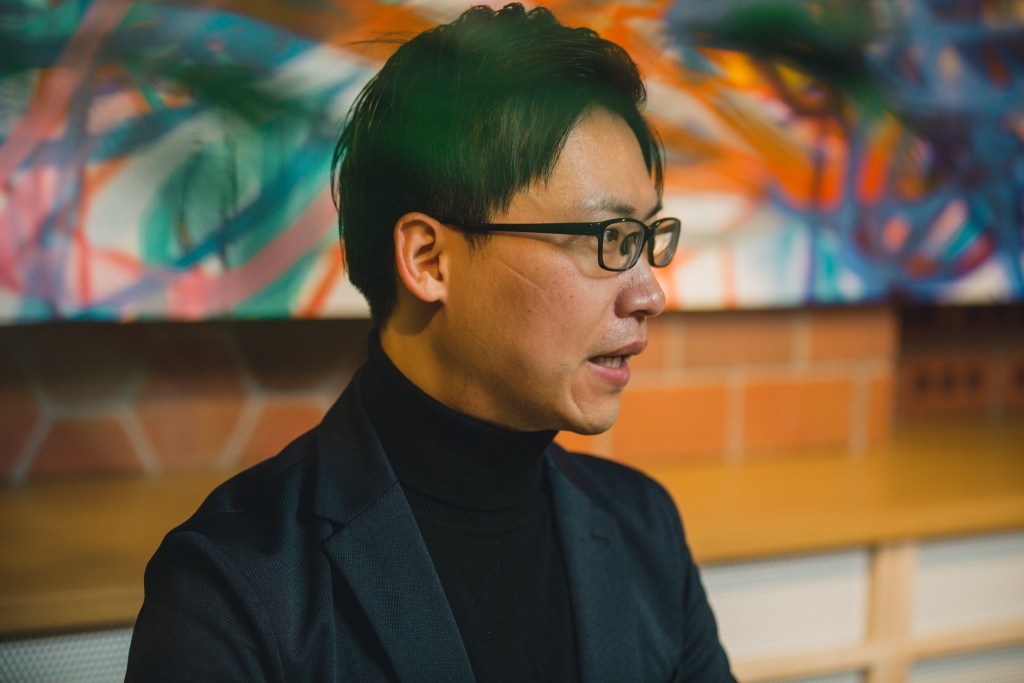 Gao says that Royole has technologies that are unavailable anywhere else in the world. This gives the company a strong competitive advantage in the global market. 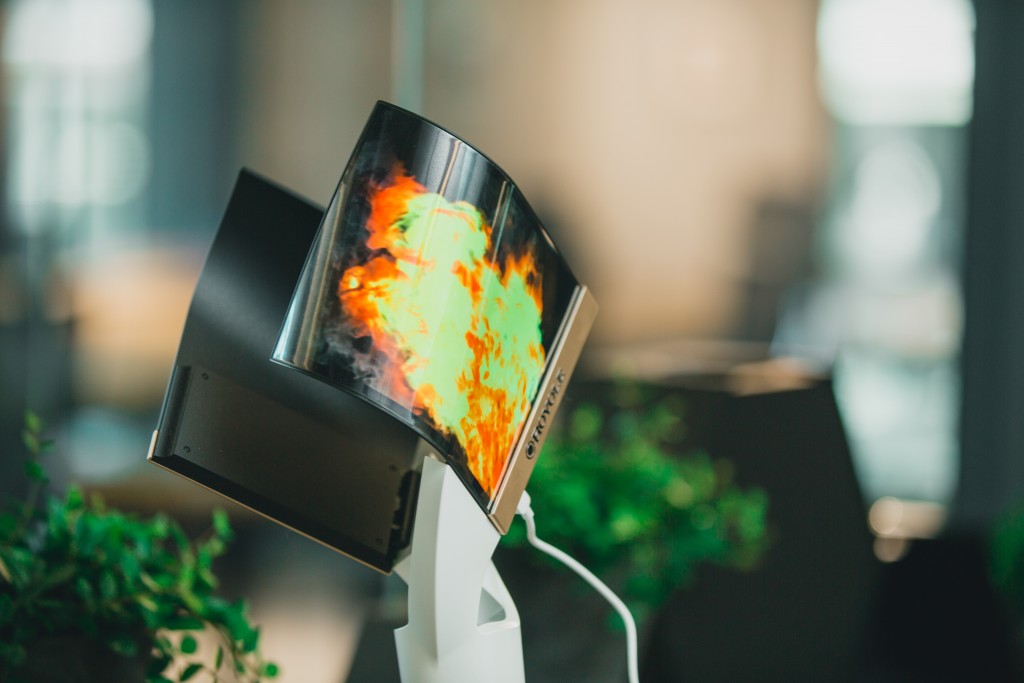 If a sensor and a display can be attached to any curved surface, the business potential seems limitless. In introducing its technologies, the company currently focuses on six key areas, Gao says.

Gao：Currently, we focus on six areas: mobile terminals, transport, entertainment/media, sports/fashion, offices, and smart homes. We have a dedicated group for each of these areas as we expand our business. In the area of mobile terminals, FlexPai, a foldable smartphone, became a hot topic in Japan. Many people may have seen the product.
We have made various advancements in the area of fashion/sports. For example, we have developed clothes and hats that come with displays. Sports fans can use them to cheer for their favorite teams or athletes. We have partnered with Li Ning, a major manufacturer of sports-related products in China, which plans to use our technologies to showcase sports gear in a variety of ways. We also made handbags with built-in displays in partnership with Louis Vuitton. The products came out in the spring of 2020 and caused a sensation in Japan and elsewhere.
In the area of transport, we are developing a vehicle with a dashboard that has a built-in display. There is a certain company that wants to use our displays for the back of aircraft passenger seats. Our displays are significantly lighter than liquid crystal displays that use glass, and they can help improve the aircraft’s speed and fuel efficiency. Elsewhere, there is an idea of putting displays on luggage compartments to run advertisements. This idea may soon become a reality.

The company currently focuses on specific business areas. However, Gao says that any curved surface could create business opportunities in the future.

Gao：Our displays are so flexible that they can wrap around a stick that is 1mm in radius. Hence, our sensors and displays can be attached to any curved surface that would not work with conventional devices to display information and advertisements.
We will expand the application of our technologies to various other industries in the future. We will also fuse our technologies with newer technologies, such as artificial intelligence. 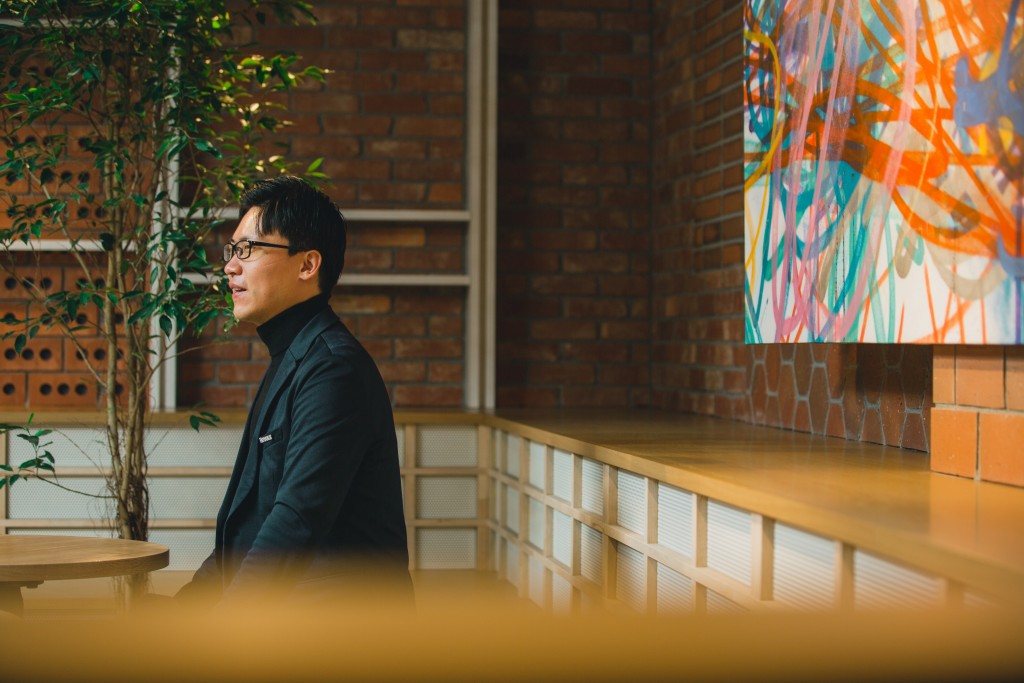 Gao is currently the only person who engages in sales and marketing at the company’s Japan office. Gao says that, as a businessman in Japan, he was amazed by the differences between Japan and China with respect to business practices and national characters.

Gao：Since Japan is a trust-based society, it is customary for businesses to close their books at the end of each month and make payments in the following month. However, I have never seen such a practice in China. In general, half of the payment is made in advance and the rest is paid immediately before the shipment. So, it was difficult to explain to the Chinese headquarters the concept of closing the book at the end of each month and making payments in the following month.
On the other hand, I really like the way Japanese people respond to our products. When they see something good, they verbally express their approval. There are countries where people do not express their emotions even if they are impressed; probably they have too much pride. So, I enjoy my sales work in Japan.
Royole, which established operational bases in China and the U.S. at the time of its launch, chose Japan as a third office location. There seem to be several reasons for this decision.

Gao：We established the Japanese subsidiary because we wanted to work with Japanese technology and culture. Japan has technology to produce high-quality home appliances and electronic devices. We will create new products by incorporating such technology.
Since we are a hardware company, we need content for our displays. Japan has various kinds of attractive content, such as games and anime. We want to work with such content. In addition to displaying existing context, we hope to find new methods of expression and create a new type of content that is only possible with curved displays.

Royole has already been covered by various media outlets in Japan. However, the company’s full-scale operations in Japan are yet to begin. We will probably have many more opportunities to see the company’s curved displays and other innovative products in Japan. It will be exciting to see how Royole’s technologies change the way we live.