TOP > Article > “Fan base,” a concept for an age of diminished reach: Fans come from within the company
SHARE
TO TOP 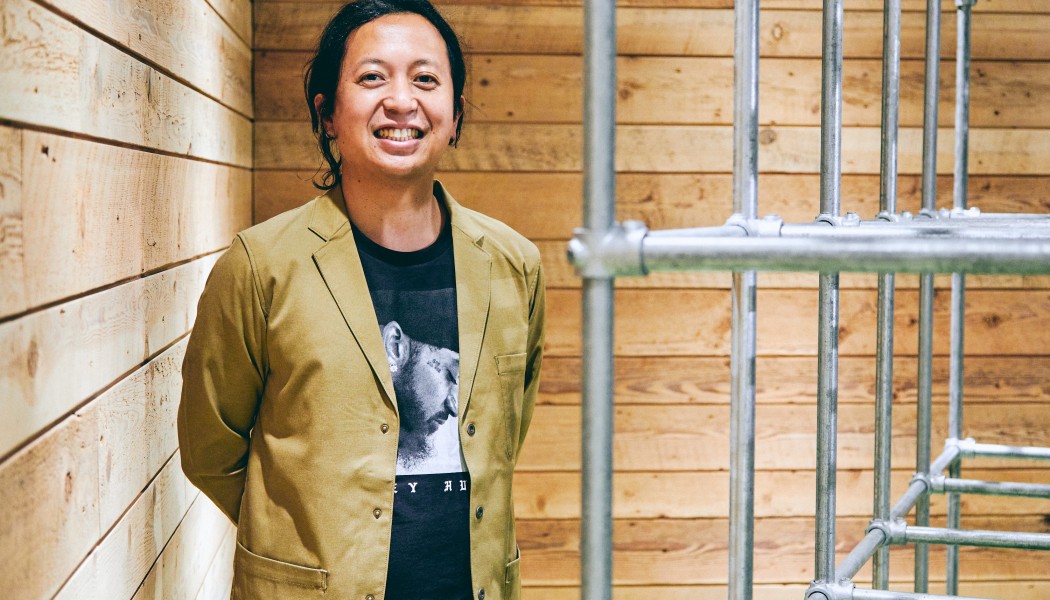 “Fan base,” a concept for an age of diminished reach: Fans come from within the company

Now that the web has lowered the cost of sending out information, the amount of information surrounding us is “greater than the number of grains of sand in the world.” In an age where we are encountering an increasing amount of information just by living our daily lives, the importance of fans is becoming even greater for corporations.

The concept of a “fan base” is crucial in an “age of diminished reach.” It is important to value one’s fans and use them as a base for increasing sales and business value in the medium to long term. Fan Base Company Co., Ltd., supports the enlightenment and practice of such forms of communication.

Mr. Masayasu Tsuda, the representative of Nescafé, who was one of the first to put the fan base into practice as the instigator of the Nescafé Ambassador program, spoke to the xTECH editorial team about the concept of a fan base and how it should be put into practice.

・The shape of communication that Fan Base aims for
・Emotional value and future value: Imperceptible values will win fans’ hearts
・Fans are born from within a company
・Key points 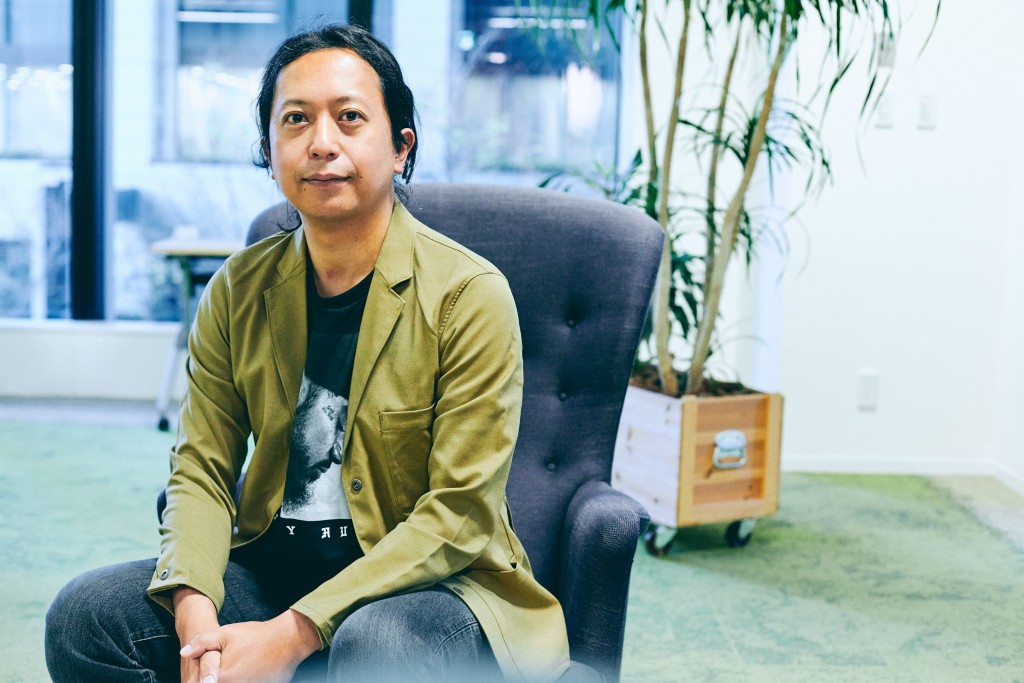 Masayasu Tsuda
Born in 1978 in Hyogo Prefecture, Masayasu Tsuda joined Nestlé Japan in 2002, and in collaboration with fans, he launched a coffee delivery service for offices, the Nescafé Ambassador program, in 2012. Since then, he has continued to launch several new enterprises while overseeing the company’s e-commerce (EC) site. In February 2019, he left Nestlé Japan to join the Fan Base Company as a founding member, which was launched a few months later in May. He has been involved in supporting many companies and brands based on the concept of a fan base and advocating for other in-house solutions. He is the author of “Fan Base na Hito tachi (The Fan Base Kind of People)” (Nikkei BP, co-authored with Naoyuki Sato).

The shape of communication that Fan Base aims for

“A fan base is a completely different concept from a fan business or fan marketing,” Tsuda said.

Tsuda: “At Fan Base, we don’t do things like harvest the fans or lock in the fans. What we focus on is to empathize with the fans’ emotions. That’s why we don’t do anything that makes fans feel uncomfortable or resistant. First, we must take care of our fans: make them happy. Having a fan base is not about methods or techniques, but rather a way of thinking. In a nutshell, it is ‘a way of thinking that values fans, and with such fans as the base, increases sales and business value in the medium to long term.” 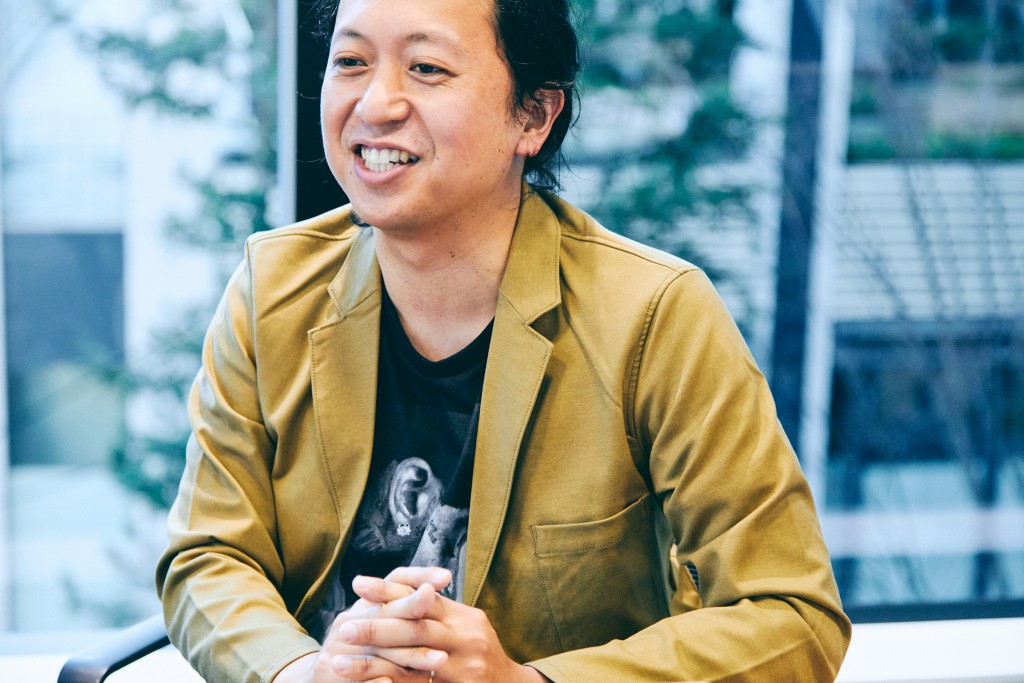 What do you mean by “fans” and what are they like?

Tsuda: “By fans we mean people who support the values that a company or brand holds dear, such as its corporate philosophy and mission. There are often cases where people are eager to develop a new customer base from scratch, but if we neglect the existing fans, they will gradually drift away.”

Rather than indiscriminately try to cultivate an unspecified number of customers, the company should take care of the small number of fans it already has. Mr. Tsuda spoke of the ripple effect this choice creates.

Tsuda: “At first, some people may be concerned whether they can expect to expand their business in the future if they only focus on existing fans. However, if the fans have strong empathetic feelings, they will naturally spread the goodness and appeal of the company to the people around them. For example, if I were to say, ‘I accepted to be interviewed by xTECH because I’m attracted to their philosophy and their representative’s enthusiasm. I’m looking forward to meeting and talking with their representative.’ Then, even if the members of the company have never heard of xTECH before, they would become interested in xTECH and would probably read the article. In this way, many people trust information from people with similar values to their own, such as acquaintances and family members, rather than celebrities and influencers. Friends with similar values are called kindred spirits.

Each person today belongs to 8 to 10 communities, large and small, such as families, workplaces, and community gatherings. Belonging to a community means that you share values with the community’s members. At a minimum, there is at least one person in the community who shares your values, in other words, a “kindred spirit.” That’s why, when information is passed on to each community member, it is passed on to new communities from one kindred spirit to another.” In other words, fans are also a way for companies to increase the number of new customers and fans. They support the business and contribute to its expansion.

What should companies, businesses, and services actually be aware of when implementing the fan-based concept? Tsuda said that the first thing to consider is the importance of the “three values.”

Tsuda: “The values that a company provides to its fans can be divided into functional value, emotional value, and future value. Functional value is what is sought in terms of ‘ease of use’ or ‘usefulness.’ For example, in the case of media such as xTECH, it could be ‘an easy-to-read layout and design’ or ‘useful content for work.’ Emotional value refers to the positive feelings that arise from owning or experiencing a product or service. For instance, in the case of media, it could be said that ‘I can relate to the thoughts of the characters, and it motivates me’ or ‘it makes me want to support the media itself.’ Future value refers to the positive image of society and the future that can be envisioned through products and services. For example, one might say, ‘I feel that the Marunouchi area, where xTECH is centered, is being revitalized,’ or ‘I feel that the future of this region is bright because of xTECH’.”

Functional value is easy for consumers to see. On the other hand, emotional and future values are difficult to see, so we tend to put them off, but this is actually an important point. Functional value is easily imitated by other companies, so, to differentiate your product, you need to focus on the other two values. By focusing on these two values, you can develop a feeling of “liking” in the people who come into contact with your business and services and increase the number of your fans. 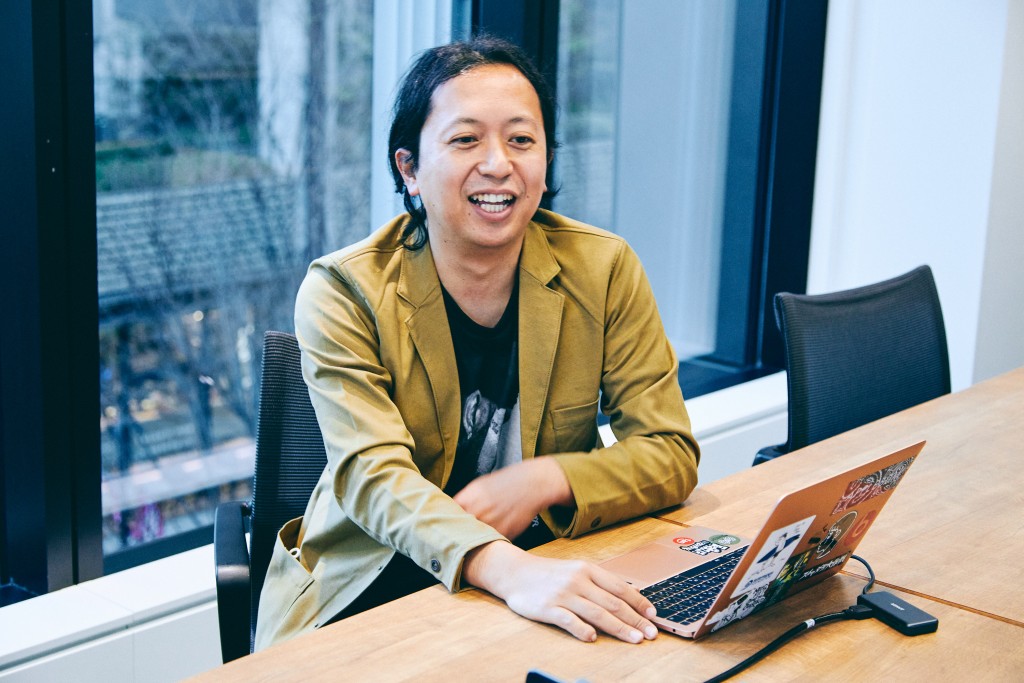 Emotional value and future value are particularly important among the three principles. Mr. Tsuda continued with strategies for increasing these two values.

Tsuda: “I think that companies in the world can increase their fans’ passion if they show more of the thoughts of the people who work there and the culture and history that they have built up. Because the frequency of seeing friends and other people during the pandemic has decreased dramatically, there is an increasing need to sense people’s thoughts and warmth. For example, when you go shopping, you want to buy a product that tells a story about the people who made it, under what circumstances, and with what thoughts. It’s the same thing. I believe that crowdfunding is booming today because it is easy to convey the emotional value and future value of a project such as the thoughts, body heat, and vision of the person who launched the project.”

After hearing all of this, you may be wondering, “Does my company have any fans?” Some people may wonder if their company has any fans, or if this is all just idealism. However, Mr. Tsuda had his own thoughts on the matter.

Tsuda: “The fact that a product or service exists in the world means that it must be solving some kind of problem. It must be making someone smile. That definitely means you already have fans. As for the question of ‘Isn’t that idealistic?’ On the contrary, I think this is a realistic and rational approach because we live in an age where the amount of information and choices are exploding and overflowing. In 2020, the amount of information reached 59ZB (zettabytes), and considering that 1ZB is said to be “the number of grains of sand on the beach that exist in the world,” it’s not hard to see why it’s important for consumers to be informed. Given this metaphor, I think you can understand how high the hurdle is for companies to convey information to consumers. With this outrageous amount of information, it may be difficult to convey through one-shot advertisements only. PV and the number of clicks may go up momentarily, but from the perspective of whether it is being conveyed, it is a little questionable. It is precisely because we live in an age where it is difficult to get the message across that the existence of fans is so important. Fans communicate with enthusiasm to the people around them. I think it’s effective to use both the conventional approach and the fan-based approach.”

Fans are born from within a company 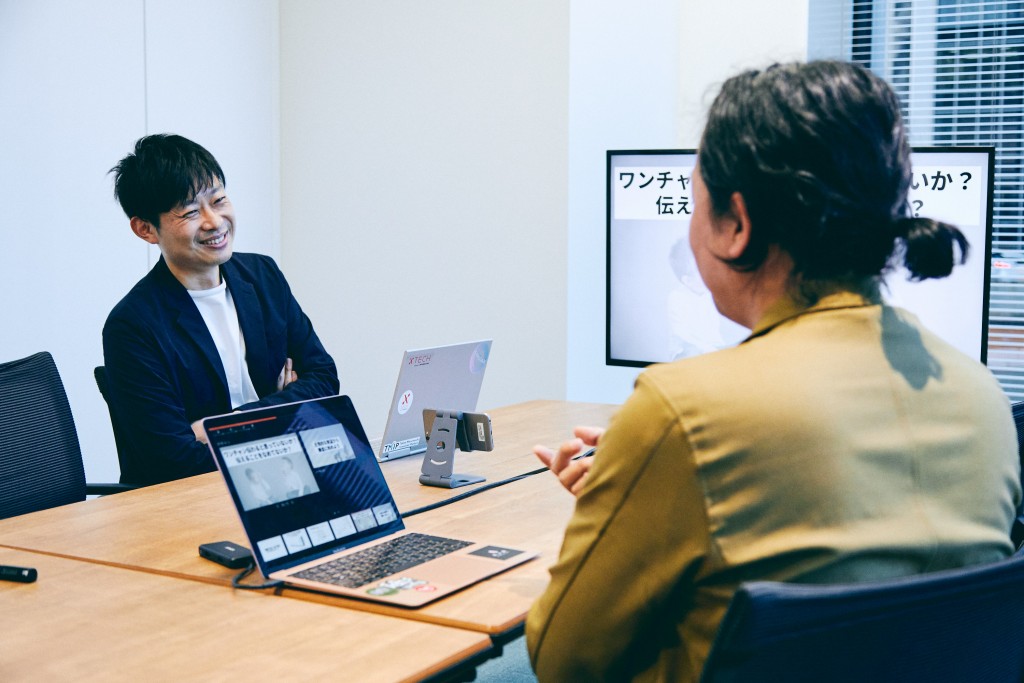 Tsuda: “When implementing a fan base, it is important to have an inner (intra-corporate) perspective. The employees’ feelings of liking or loving their products and service will eventually ooze out from the products and services themselves. The employees then become fans and spread the word to others around them. If Mr. Ishimori were to be transferred to another department, I think the people who have been involved with him in the past would reach out to him beyond the boundaries of the company. I think there are more and more “kindred spirits” who share Mr. Ishimori’s passion. It might even be a good idea to hold a ‘fan meeting’ for xTECH.”

Ishimori: “Up until now, my focus has been to look outside of the company rather than within, such as looking for the startups I wanted to reach. It was also eye-opening to hear that the things I’ve done and the thoughts I have turn into an emotional value, and that the inward perspective (a focus on the intra-corporation) is important. If I were able to ask specific questions such as ‘What kinds of people are the core fans of xTECH?’ and ‘What kinds of content do they find interesting?’ we might be able to run a business that is more in tune with fans. If we can do that, it may change the future of xTECH.” 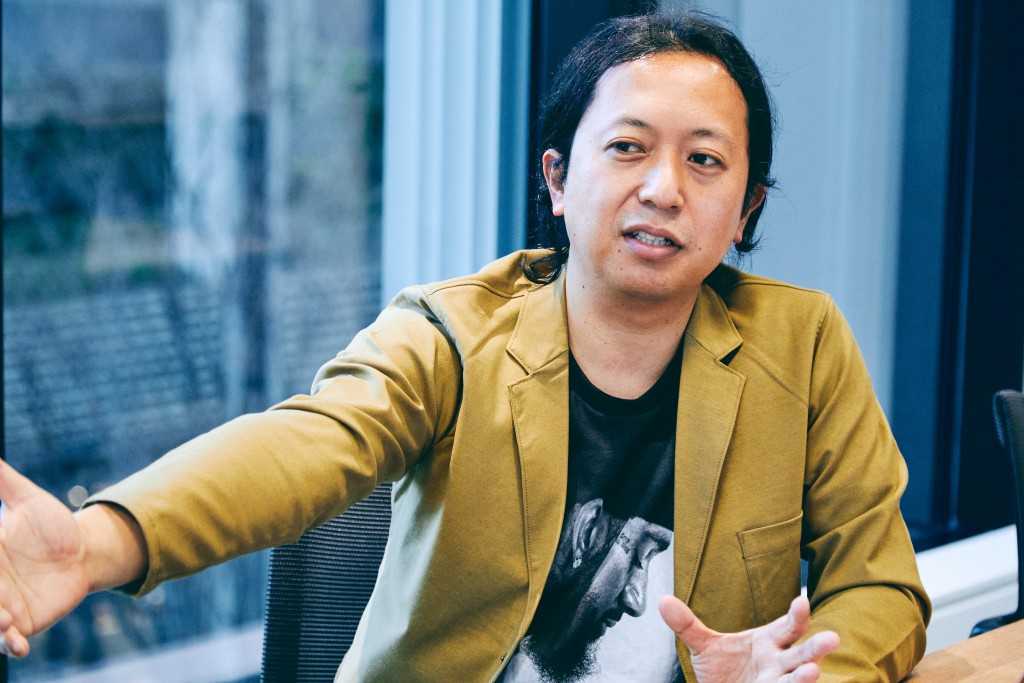 Tsuda: “A fan base is something you work on with a mid- to long-term perspective. Sustainability is key. It’s about creating initiatives that we can continue while enjoying ourselves. To reiterate, fans are people who support the values that a company or brand holds dear. On the flip side, if the core values of the people within the company are not firmly grounded, such values will not be conveyed to fans. I think it would be great if you could look at that and pursue what you believe is important and fun.”

・ The concept of valuing fans and having them as a base to increase sales and business value in the mid- to long-term.
・ If fans’ empathy is strong, they will naturally spread the goodness and attractiveness of the product to others around them.
・ Functional value is easily imitated by other companies, so the other two values should be emphasized to differentiate the product.
・A realistic, rational approach is needed in an age where the amount of information and options is exploding and overflowing.
・ The inner perspective is important, and employees’ feelings of liking something will ultimately be expressed through the products and services.
・A fan base is something to work on from a mid- to long-term perspective. Sustainability is important.