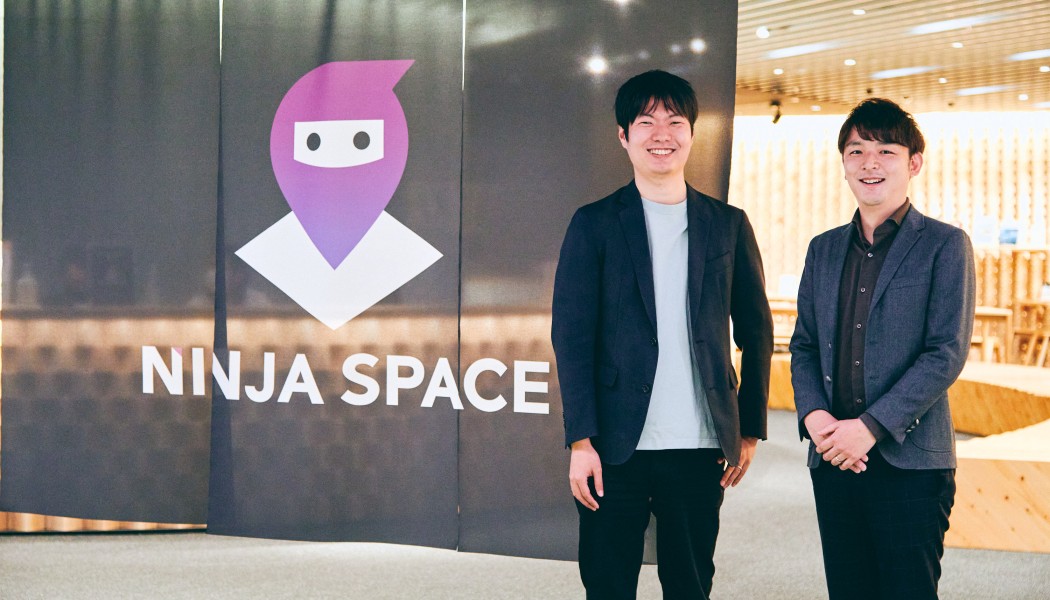 Major company employee, consultant, business investment manager, and new business launcher: The stance on business creation that I felt through my various positions

“NINJA SPACE” is a workspace matching support service. The service aims to support telework and space usage at the same time by efficiently matching businesspeople who are looking for a location to conduct business with partner companies that offer available spaces.

The release of a new service that leverages the assets of a major company was made possible by Mitsubishi Estate’s experience and involvement in urban growth and real estate development. However, behind the scenes, those involved realized the rewards and difficulties of developing such a service with a sense of speed in a major company.

This time, we spoke to Mr. Nasui from the New Business Creation Department, the creator of “NINJA SPACE,” and Mr. Hashimoto, who is involved in the development of the service, and asked them to share their inner thoughts on new business development within a major company.

・Aiming to create new businesses that goes beyond investments
・What are the barriers to turning a major company into a startup?
・What is the joy of developing a service that leverages the strengths of a major company?
・Key points 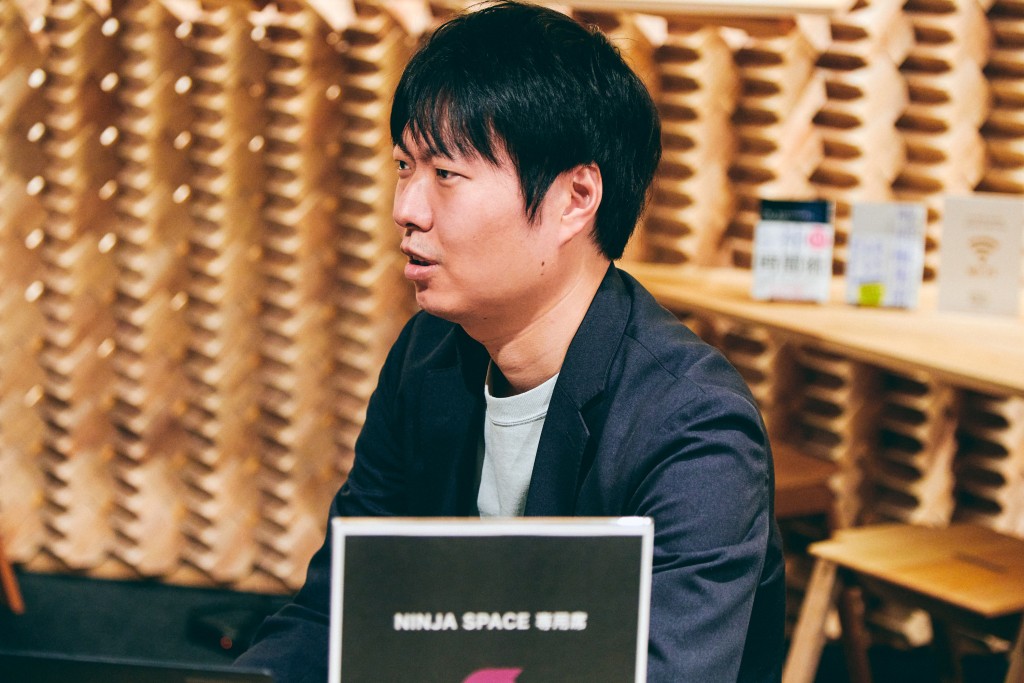 Toshiyuki Nasui
oined Mitsubishi Estate in 2006. After working on condominiums, urban redevelopment, and building value chains for the housing business group companies, he joined the New Business Creation Department in 2016. With the aim of realizing open innovation and creating profits in new businesses, he promotes collaboration and capital and business alliances with startups. He has also been involved in MEIC, a new business proposal system that works across the Mitsubishi Estate Group. In 2020, he launched the NINJA SPACE project. 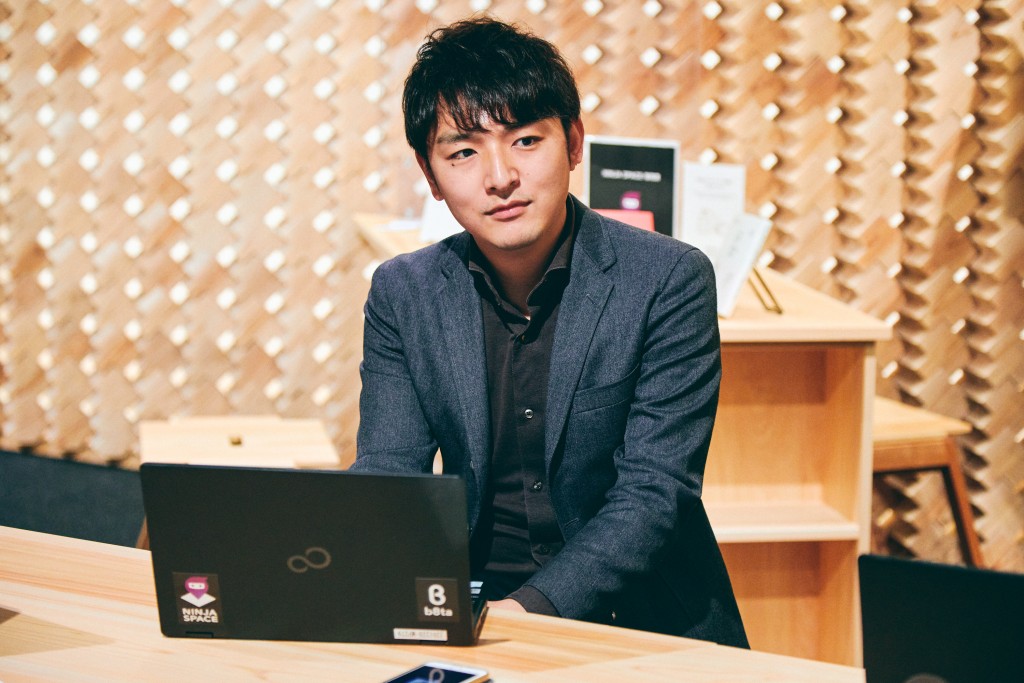 Yuta Hashimoto
New Business Creation Department, Mitsubishi Estate Co., Ltd.
After graduating from university, he joined a major newspaper corporation. After working for a foreign consulting firm and a railway company, he has been in his current position since 2021. In his previous position, he oversaw new businesses and all aspects of open innovation strategies with startup companies, including the launch, planning, and operation of accelerator programs and incubation spaces.
He joined Mitsubishi Estate in 2021 and among other responsibilities, he oversees investments in startup companies in the New Business Creation Department. He aims to form an innovation ecosystem between startups and major companies to transform existing industries and create new ones.

Aiming to create new businesses that go beyond investments

As a businessperson who is often away from their normal work environment, there are times when one needs space to do work. For example, one might need to do a little work before the next appointment, or perhaps there is a sudden need to have an online meeting while on the road. However, once one starts seeking out a location, it is quite common to find no ideal cafés from which to work.

In particular, due to the coronavirus pandemic, there is a tendency to avoid long stays in cafés and a desire to avoid engaging in meetings where one must use one’s voice in such locations. In addition, there are no guarantees that one will be able to enter a café easily due to the adoption and popularization of telework, in addition to securing enough space for social distancing. Even if one were to enter a shop, one might feel guilty because one may be discouraged from occupying a seat for a long time. “NINJA SPACE” is a service that was created in light of these recent circumstances. 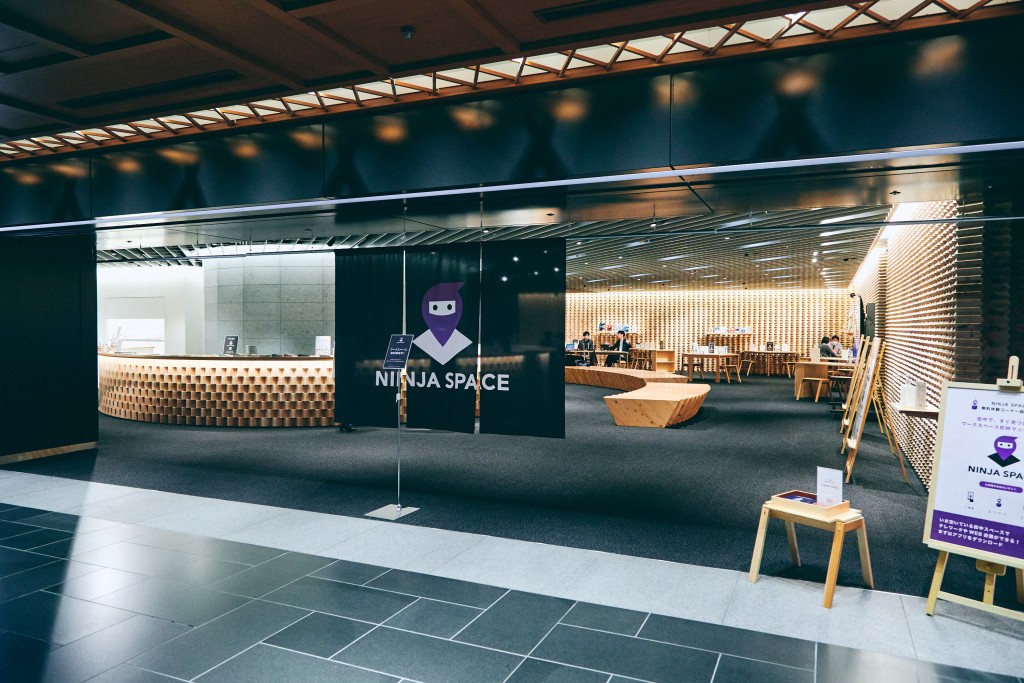 Businesspeople looking for a workspace can use the app to search for available spaces in their neighborhood. The immediacy of the service, which allows for immediate matching if entry is possible, has attracted attention, and as of May, there are more than 2,000 registered users.

Nasui: “The New Business Creation Department originally embarked on the realization of open innovation by investing in startups. For this reason, creating new businesses on our own was an area in which we had no experience. This project, to create a business from scratch on our own, was a rare experience for us.”

A person with a unique background has also joined this project. After working for a newspaper company and a consulting firm, Mr. Hashimoto oversaw new business and open innovation strategies in his previous position at a railway company, including the launch of accelerator programs and incubation spaces. At the urging of Mr. Nasui, Mr. Hashimoto moved to Mitsubishi Estate, where he is involved in startup investments and other activities while also participating in this project.

Hashimoto: “I decided to change jobs at Mitsubishi Estate because, in the midst of the convergence of the digital and real worlds, I saw great potential for innovation in the field of real estate development, which has abundant real assets. Innovation in major companies is very important if we want to create a new industry in Japan.
I thought that Mitsubishi Estate, with its long-term perspective on urban growth, would be able to take on the challenge of open innovation and new business development more than ever before.”

The development of “NINJA SPACE” started in the autumn of 2020. The speed with which they were able to roll out the business (about half a year) would put a startup to shame. How did they overcome the challenges of developing a new business at a major company, where it is often thought that the number of stakeholders and the tight schedule make it difficult to proceed? 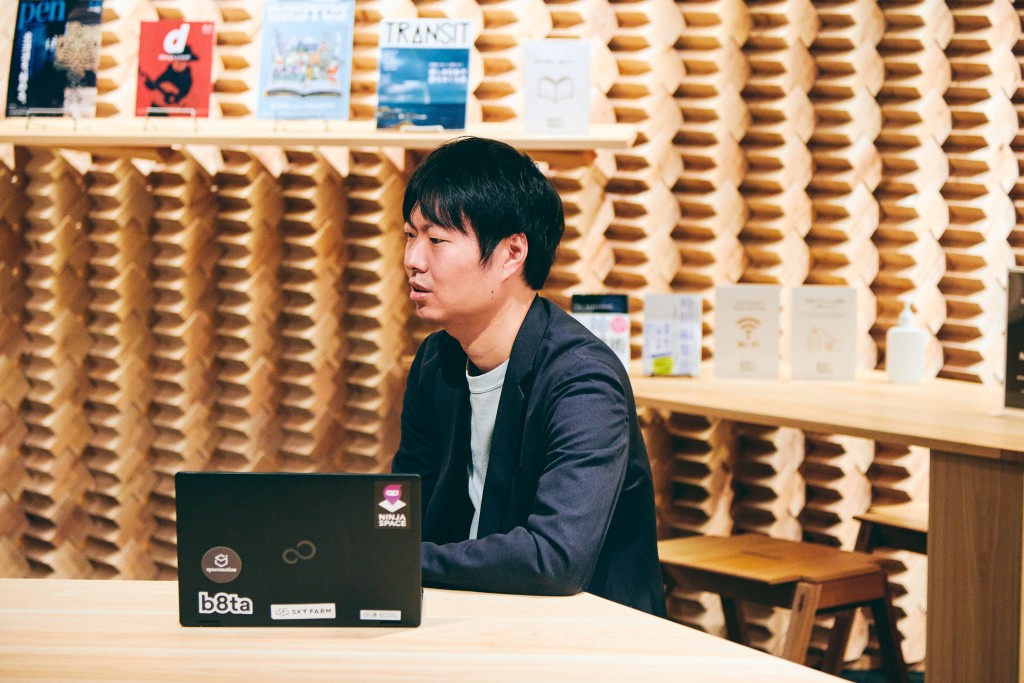 Nasui: “Agile development is generally used for service development at startups. Services are first released at the earliest possible time, and then improved based on user feedback and needs. However, such a development method is not typically adopted by large corporations. We had to decide on the shape of the service to some extent before it was released, and because of the huge impact it would have on society, we could not afford to make any mistakes.
Even so, we focused on speed this time. Because of the coronavirus pandemic, we saw businesspeople seeking telework spaces, restaurants, and other food and beverage industries going out of business. We felt the need to start the service as soon as possible. In the end, we demonstrated the form of the service we wanted to create, and made a decision to facilitate the process using agile development processes; we proceeded with development quickly.
Of course, we were anxious because it was our first time working on such a project, but I think we were able to achieve this development system because we had already launched several new businesses within the company.”

Hashimoto: “I have belonged to a number of major companies, but I was surprised to find an environment where new businesses can be launched with such speed. Mitsubishi Estate has a culture of giving increasingly more authority to younger employees and entrusting them with tasks, and I feel that the company is very open. I have the impression that the company is proactive as a whole about new businesses and has a strong system, such as with an internal new business program to support those who take on new challenges.” 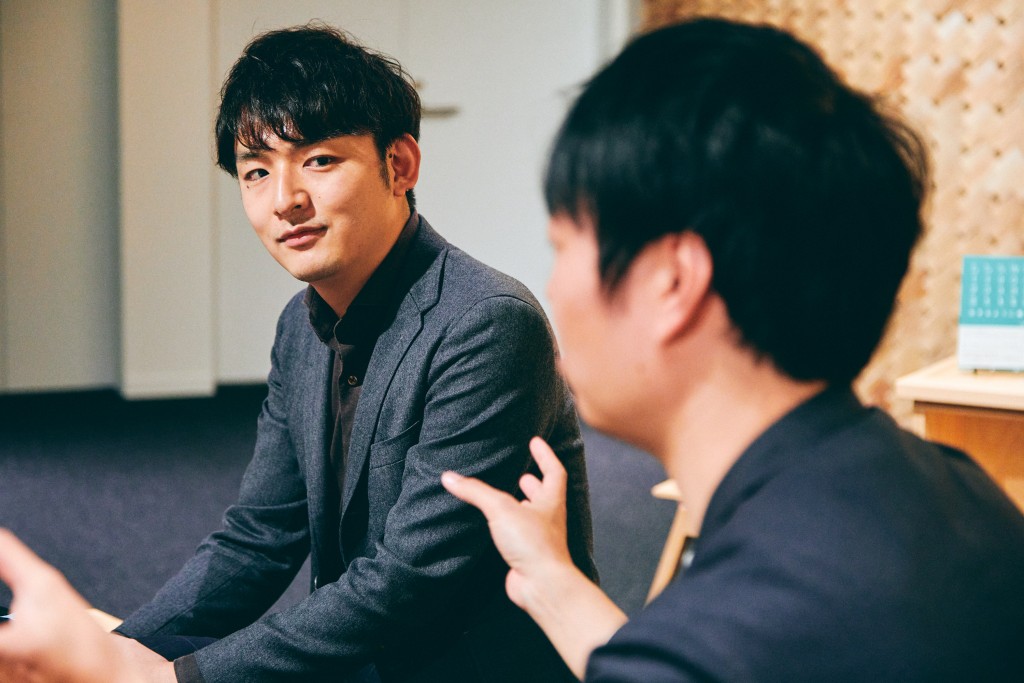 Nasui: “Because this is agile development, we proceeded with development while communicating closely with our partners, with whom we have regular relationships. We didn’t set the specifications too firmly, but made improvements quickly in response to user feedback, even after the business was rolled out. We were able to work with a partner who could work with us to come up with the right specifications when we told them what we wanted, so we were able to work at a very fast pace.”

Hashimoto: “It is often said that ‘large companies are difficult to move because they are large,’ but we have a wealth of assets such as human resources, networks, and funds. While fully utilizing these strengths, I think it is necessary to ‘start up’ new business development at major companies by adopting methods such as agile development, and creating a system and culture that firmly supports those who have the will as a company. I think it is necessary to ‘startup’ new business development at major companies.”

What is the joy of developing a service that leverages the strengths of a major company? 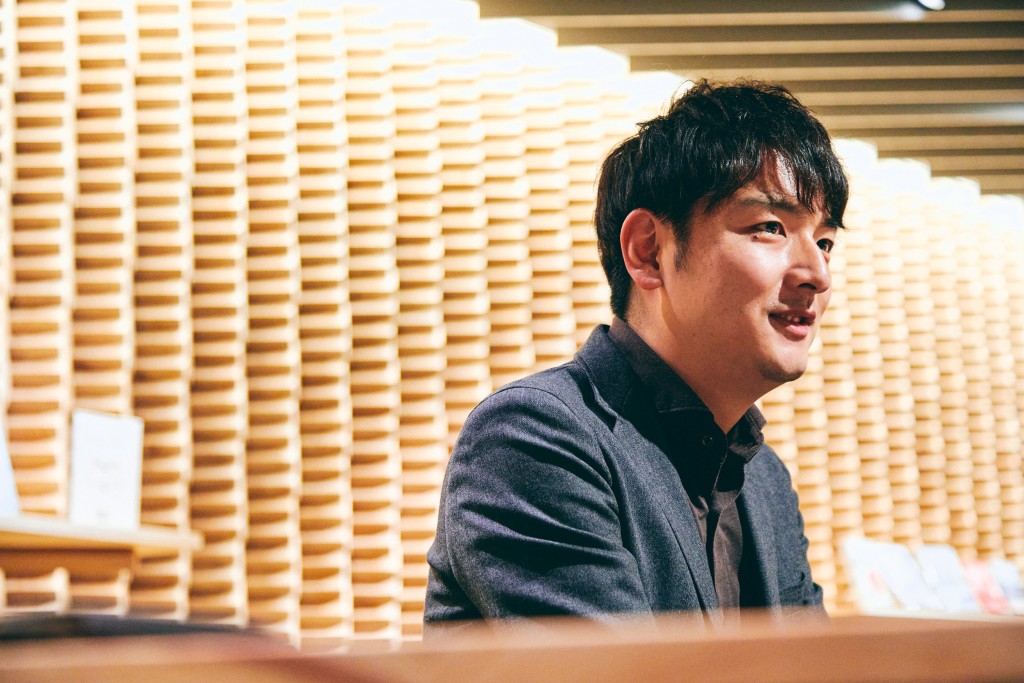 As they work on new businesses while carrying the title of Mitsubishi Estate, they say that they have a strong sense of responsibility where they cannot make mistakes, and a sense of mission through which they want to leave a positive impact on society. What is the pleasure of being involved in business development while working for a major company?

Nasui: “I have invested in many startups in the past, but the differences between following the birth of a business from the side and actually being involved in creating a business is so vast, I was taken aback by how difficult it was. At the same time, I was greatly impressed by the mindset of startup executives, who put everything they have on the line as they launch a business.
We must build our business alongside these executives, who are full of vitality. We are constantly stimulated, and we would like to leave behind businesses that have an impact on society while providing good inspiration to the managers around us.” 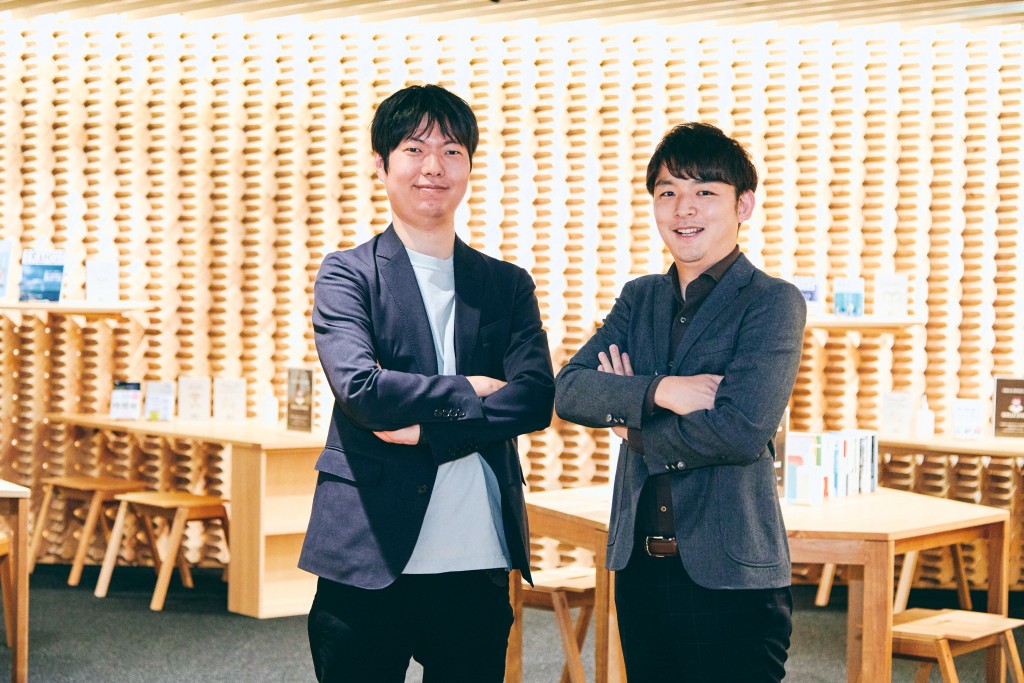 It has only been two months since the pre-launch, and we’re looking forward to the future of NINJA SPACE. Finally, we asked about their thoughts on the future of their service and business as a whole.

Nasui: “Particularly, in a world amidst the coronavirus pandemic, we see many people who cannot freely telework from places other than their homes. We want to solve such problems and to create a place where anyone can work comfortably at any time, and make such a practice the norm. As a real estate developer, Mitsubishi Estate Property Management can build an industry that can surprise not only Japan, but the world with its real x digital perspective.”

Hashimoto: “People tend to think that what we offer in NINJA SPACE is simply a space to work, but in fact it is not. Rather, NINJA SPACE is the very experience of being able to work anytime, from anywhere. In the process of creating the business, I feel that there are many possibilities for providing value at Mitsubishi Estate. I would like to join forces with startups and other partners to fuse the power of the real world and the digital world to create world-class services.”