TOP > Article > Graduating beyond the Pursuit of GDP Growth to Seeking a New Kind of Happiness｜Future-Building Mindset vol.3
SHARE
TO TOP 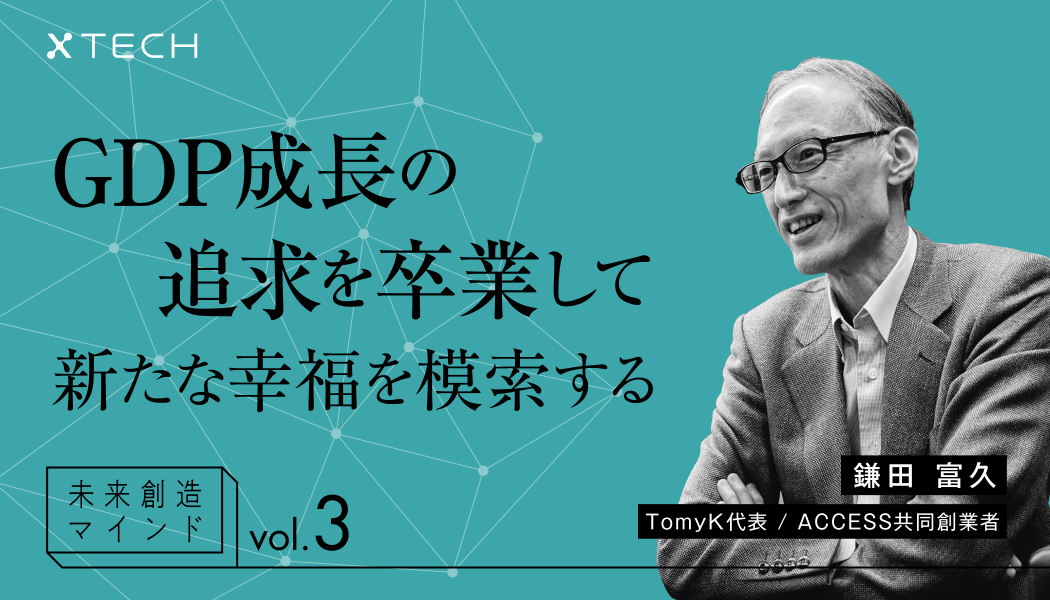 Graduating beyond the Pursuit of GDP Growth to Seeking a New Kind of Happiness｜Future-Building Mindset vol.3

Globally, Japan ranks 56th in happiness. March 20th is International Happiness Day and annually, on this day, the relevant United Nations organization publishes the World Happiness Ranking (in the World Happiness Report [1]). Happiness levels in Japan are relatively low every year. We have become richer in material things, but not necessarily satisfied. This is an era of searching for what people desire, what companies should create, and what kind of ideal society the world should be. Here, we consider the future emerging from the growth of the economy of goods.

Since 2012, the World Happiness Survey Report published annually by the Sustainable Development Solutions Network (SDSN) of the United Nations, has surveyed over 150 countries. Finland (for the 4th consecutive year) ranked first in this year’s world happiness rankings, with the Nordic countries at the top. Japan ranked 56th. The top Asian country is Taiwan in 24th place. Japan, which ranks third in gross domestic product (GDP), may be economically rich, but that alone does not elevate people’s sense of well-being. 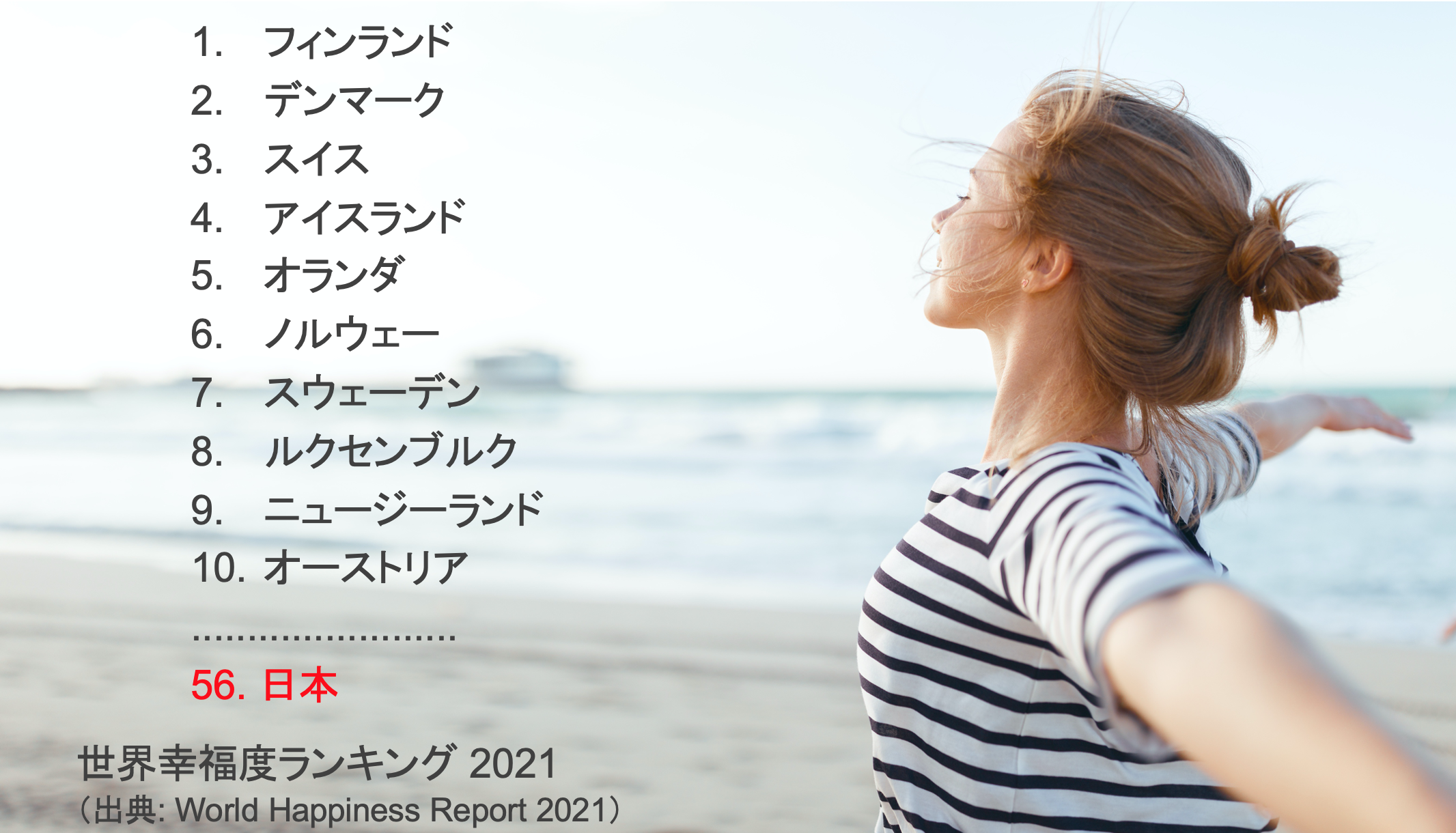 Along with the subjective happiness of the citizens of each country, the happiness score is calculated by taking the following six items into account:
(1) GDP per capita
(2) Social support
(3) Healthy life expectancy
(4) Freedom of life choices
(5) Tolerance for others
(6) Confidence in the country
Japan has a relatively high GDP per capita and superior healthy life expectancy, but subjective well-being and tolerance for others are particularly low. Happiness levels are only referenced as an indicator, although it can be implied that in a materially affluent Japan, economic growth (as indicated by GDP) is becoming increasingly delinked from life satisfaction.

End of the rapid growth of the economy of goods

All countries undergo a stage where population and economic growth synchronize, and the country becomes richer. During this period, the economy will be stimulated by the government’s support for manufacturing, construction, and other industries, and their initiatives to develop lifestyle infrastructure (electricity, water, gas, and communications, among others) and transportation networks (including roads, railroads, airports, and ports). As the economy grows, food, clothing, and shelter will be enhanced, and the living standards of people will rise. By improving health, medical care, and welfare, health levels will also increase. 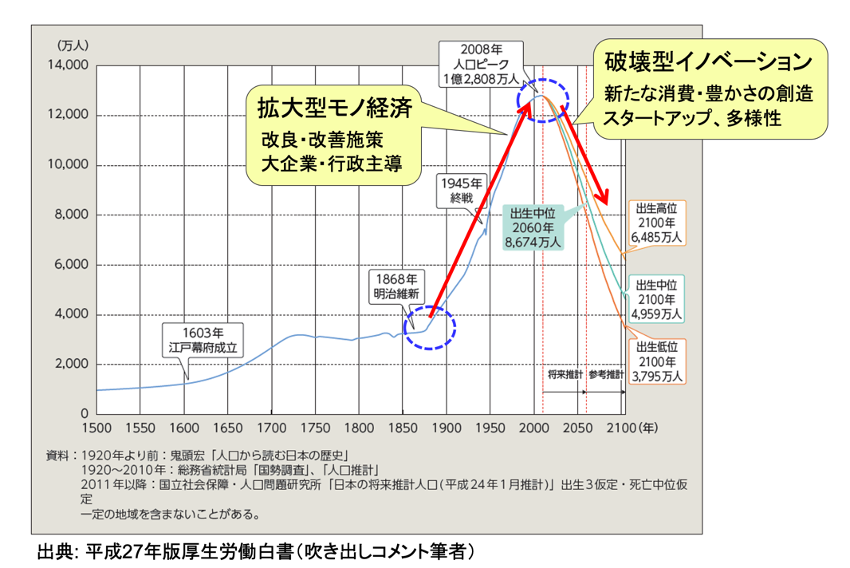 In the rapid growth stage of the economy of goods, large companies should invest in capital items and expand production. Demand drives the economy. Quality and productivity can be continuously improved by enhancing product development and manufacturing processes. Observing Japan’s GDP trends, there was an era of staggering economic growth between 1960 and 1975, at an average rate of 8.1% in real GDP, exemplifying the expansion-oriented growth of the economy of goods. Prospects were bright, the whole country became rich, and all the people benefited. Growth seemed to be easy! 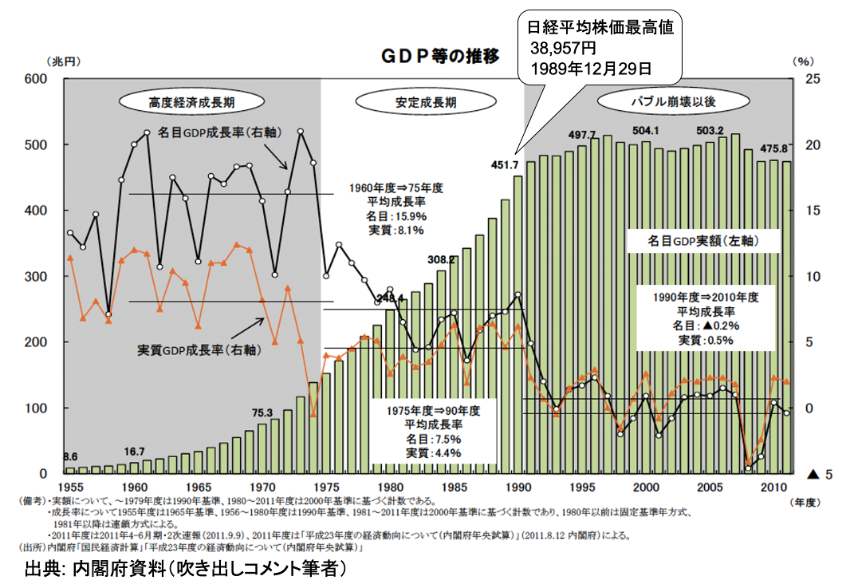 During this era of high economic growth, the Japanese economy grew and ran efficiently as large corporations and the government worked together to develop social infrastructure and conduct large-scale public works projects. Productivity improved, per capita income increased significantly, and consumption rose accordingly. People sought many items, such as home appliances, cars, and their own homes. Mass production and consumption continued to expand. During this period of rapid growth, Japan’s median age was in the 20s—an era full of energy.

The 30 years of the Heisei era (corresponding to the reign of Emperor Akihito from 1989 to 2019)—which occurred between the peaks of the population—was a period when both population and economy were stagnant. Accordingly, the Nikkei Stock Average reached its highest point of 38,957 yen on December 29, 1989, with the Japanese stock market remaining stagnant thereafter. The Heisei era—when stagnation was a viable option—is over and we have now entered into the Reiwa era (current imperial reign that commenced on May 1, 2019). In the past, it was possible to maintain strength in some areas of the economy due to growth momentum, but this is no longer valid. The only choice is to cope with this change in social structure.

The paradigm of competition will change

Japan’s population has been declining since its peak in 2008, and the domestic market is shrinking as the population ages. As an indicator of the immediate future, some companies have decided to move from the shrinking Japanese market to emerging countries whose populations are increasing. This is advisable. However, the growing population of emerging economies is also expected to slow and stabilize as countries become more affluent. We must tackle the challenge of creating new value in an environment that cannot rely on population growth.

The challenge of revitalizing the economy amid a declining population is, in simple terms, how to increase per capita consumption. We only eat three meals a day, we don’t need twice as many clothes and having one house is sufficient. We have almost all the items we need. Rather, this is the time to share rather than own goods. Even if personal income increases, it is difficult to increase the consumption of goods. This compels us to provide what people want, other than food, clothing, and shelter. The economy of an affluent society may be heavily affected by a declining population.

Happiness can no longer be increased through the enrichment of possessions—there is a limit to the conventional thinking that uses GDP growth as an indicator. Therefore, measures employed during the phase of population decline will have a completely different logic to the time when demand continued to grow at a steady pace. Until now, competition was directed towards (or to expand) a fixed market. Current industries in the economy of goods are forced to reexamine the systems and organizations that have been expanded so far.

Moreover, novel technologies, such as digital technology and AI, are rapidly threatening (or creating gaps in) existing businesses or launching entirely new areas. Some businesses will disappear. Consequently, disruptive innovations are needed. But some people disagree with this. The success stories of rapid growth get in the way. The desire to think that “it is still going to be fine” delays the decisions. Thus, there is a tendency to act only when there is no other choice.

Creating a new kind of wealth

Is low or no GDP growth a negative thing? It could be interpreted as a sign that a country has become materially richer and more mature. We would like to think of it positively. The needs of the market are already changing dramatically. In developed countries, including Japan, people’s interest is not in mass-produced goods but in specialized products and services that suit their tastes. They are more interested in empathizing with the thoughts and stories of the creators behind the products or services. To facilitate this, a flexible and agile development system with high-mix low-volume, user interaction, and personalization will be necessary. This novel style of business is where startups excel. 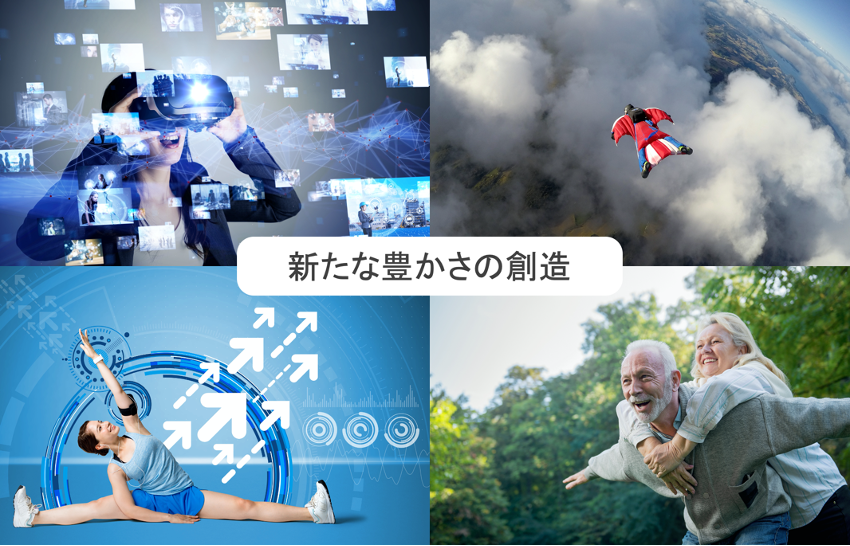 In a materially satisfied society, people want growth experiences, connections with others, interesting themes, and novel discoveries. Such experiences make daily life more personal and enjoyable, thereby enriching our lives. The desire to live a longer and healthier life is a fundamental human need. We are also becoming more conscious of the need to use our time effectively. What fosters a vigorous and fulfilling life? Creators are being asked to create a new kind of wealth.

The mass production, improvement, and upgrading of conventional products are areas where large companies excel. Existing markets are easy to analyze. They can rely on their rich experience and accumulated knowledge. However, what people want in the future will be something that they have never seen before. The paradigm of competition will change, and new products and services will be born out of many challenges.

Thus, even if the amount of goods consumed does not increase, people’s sense of well-being should increase based on the contents of products and services. Moreover, intangible values such as empathy, connection, a sense of accomplishment of being useful to others, and health will lead to well-being—this cannot be measured by GDP. It is time for us to graduate from using GDP growth as an indicator of wealth and to create a new era. This is truly a challenge that requires a mindset for creating the future.

Note 1) World Happiness Report, https://worldhappiness.report
Japan’s happiness level has been declining in recent years, ranking 54th in 2018, 58th in 2019, and 62nd in 2020. In 2021 it was 56th, possibly because—while many countries were greatly affected by COVID-19—Japan imposed relatively fewer restrictions on daily living.

[Tomihisa Kamada: President of TomyK / Co-founder of ACCESS Corporation / Entrepreneur / Investor].
PhD. in Information Science from the Graduate School of Science at the University of Tokyo. Doctor of Science. Founded ACCESS, a software venture company, while still a student. In 2001, ACCESS was listed on the Tokyo Stock Exchange’s Mothers section (currently within the First Section) and expanded its business globally. In 2011, Kamada retired from the company and founded TomyK, a firm providing support to startups, and is currently launching a number of technology startups in the areas of robotics, AI, human augmentation, space, genomics, and medicine. Kamada is the author of the book “Technology Startups Create the Future: Aiming to Become a Tech Entrepreneur” (University of Tokyo Press), which explicates the entrepreneurial mindset.