TOP > Article > Leading the Transformation of a Society with a Declining Population ｜Future-Building Mindset vol.2
SHARE
TO TOP 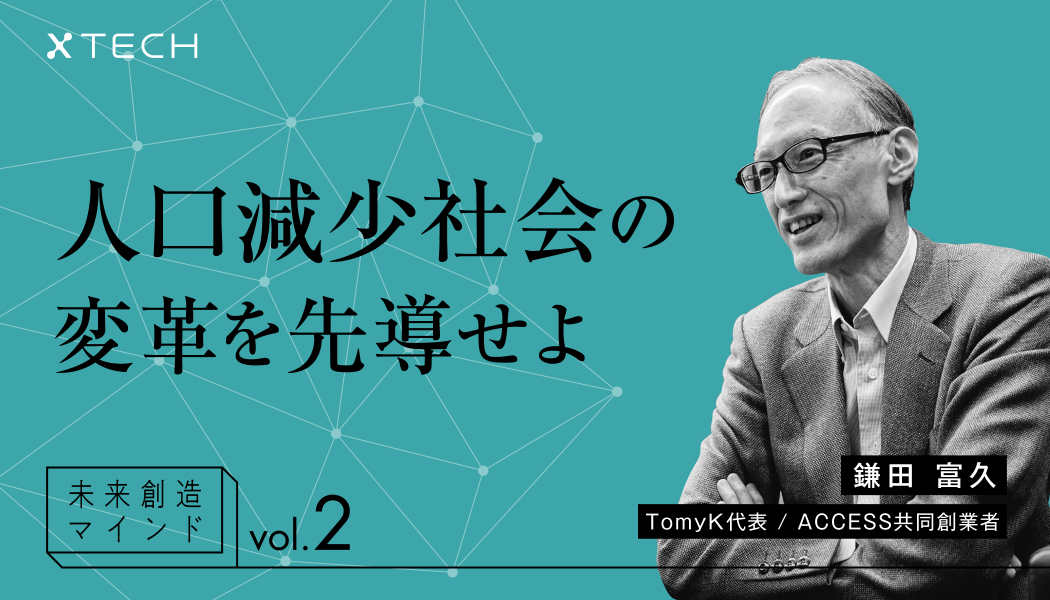 Leading the Transformation of a Society with a Declining Population ｜Future-Building Mindset vol.2

apan is entering an era of declining population. It is difficult to discern this change in daily life, but there will certainly be a change that has never been experienced before. Instead of being swallowed up by this large wave, we want to lead the transformation of society with the attitude of taking on new challenges, a “mindset for creating the future.” At this time, we consider the future in which population decline is progressing rapidly.

・Japan’s median age is 48.4 years
・Japan faces challenges ahead of the rest of the world
・The tide has completely turned
・Leveraging AI and robotics

As the oldest globally, 48.4—the median age of Japan’s entire population in 2020—is a worrying number. This implies that more than half of the population is 48 years of age or older. Japan is often characterized as an aging society, and it is shocking to have such a high median age. According to the population estimates of the United Nations, the median age of Japan will rise further in the future, and by 2060 it is predicted to exceed 55 years of age. Of course, longevity is a positive thing, but 48 years of age is still young in today’s Japanese society. In fact, in all traditional organizations, including large corporations, government agencies, universities, and research institutes, the number of posts has not increased, and there are already long waiting lists for posts to become available. Consequently, it has become a society in which young people find it difficult to actively contribute. 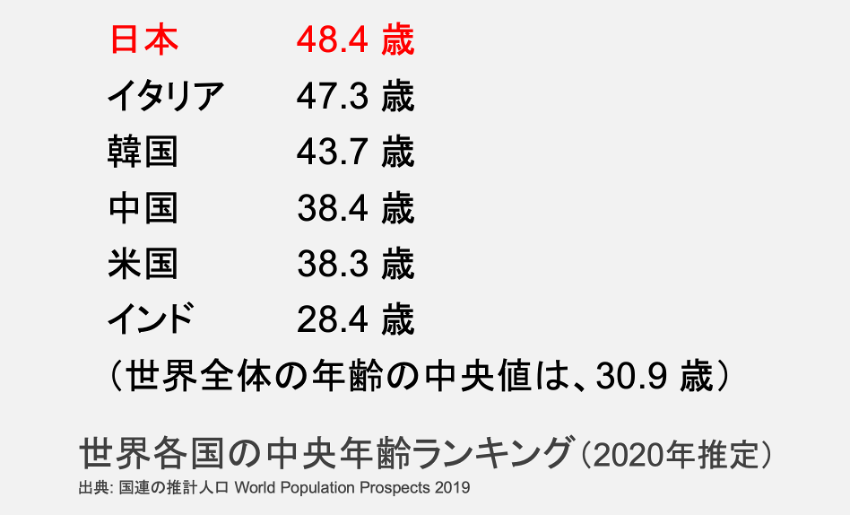 In comparison, the median age in China and the U.S. is 38 years, 10 years younger than in Japan, and in India, it is 28 years, another 10 years younger. In countries with large populations, momentum is created by younger generations. It is young people who are sensitive to trends, such as novel technologies and innovative business models, that lead to the future. Even if the rate of digital diffusion is somewhat slower than in developed countries in Asia and Africa, it will soon spread to these emerging countries with many young people. Smartphones have proliferated more rapidly than we had imagined, while cashless payments and various Internet services are also expanding and the number of startups is steadily increasing.
In Japan, from 1965 to 1970, the median age was around 28 years old during the heart of high economic growth, from the Tokyo Olympic Games (1964) to the Osaka Expo (1970). Today, as a mature industrialized country, Japan faces the new challenge of the advent of an aging society. Executives and leaders from all organizations should actively incorporate the opinions and proposals of young people; otherwise, there is a risk of being left behind in a rapidly advancing world.

Japan faces challenges ahead of the rest of the world

In Japan, which is experiencing a declining birthrate and aging population, the economy will shrink as domestic consumption simply declines in line with a shrinking population—unless per capita consumption increases. This challenge is not limited to Japan. The World Population Prospects of the United Nations (World Population Prospects 2019 and https://population.un.org/wpp/), projects that the global population will grow from 7.8 billion in 2020 to 9.7 billion by 2050 and 10.9 billion by 2100. Thereafter, the population growth rate will decline, and the entire world will become an aging society [1]. Affluent societies are experiencing a natural decline in their populations for the first time in human history. Japan is ahead of the rest of the world in facing the major shared challenges that humanity will face in the future. 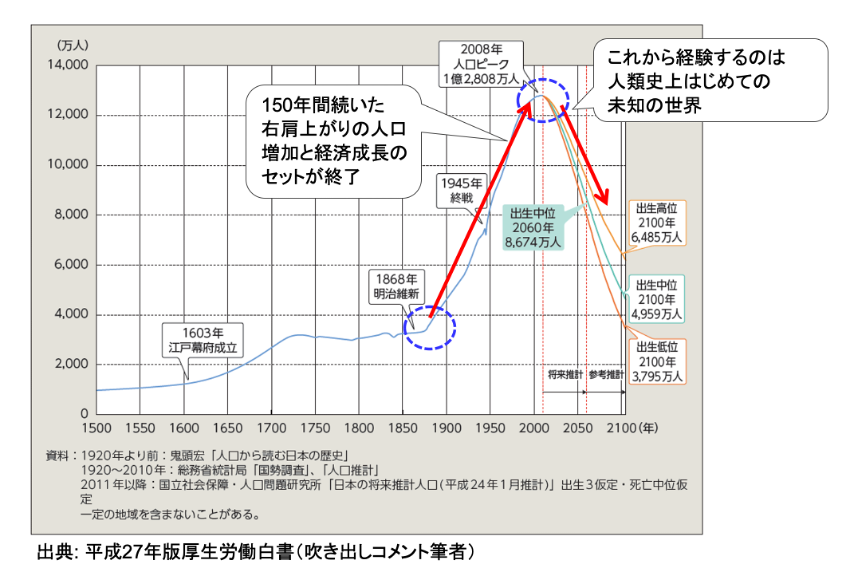 Let us revisit Japan’s population prospects. This graph depicts the population prospects from 1500 AD to the present, with projections to the year 2100. It is understood that during the Edo period (1603 to 1867) the population was stable at just over 30 million. Due to industrialization and modernization after the Meiji period (1868 to 1912), the population rose dramatically. This trajectory was almost in a straight line for 150 years, although there was a temporary decline during World War II. Economically, especially in the manufacturing sector, a virtuous cycle ensued during which productivity improved, people’s income increased, and consumption expanded. The Japanese people collectively became prosperous, and, consequently, the economy grew significantly as the population expanded.
Japan’s population, which peaked at 128.08 million in 2008, is already on a downward curve with predictions that it may drop below 50 million by 2100. According to a report by the Ministry of Health, Labor and Welfare, the number of births in 2019 was 860,000—falling below 900,000 for the first time since the advent of statistics in 1899. The birth rate has dropped to 1.36 and the decline in the number of children is accelerating beyond the government’s expectations [2]. Moreover, due to the Coronavirus crisis, the numbers of marriages and pregnancy notifications in 2020 were significantly lower than the previous year, raising concerns of the further acceleration in the declining birthrate from 2021 onward.
Japan’s future population will change depending on the subsequent measures taken by the Japanese government, including policies to combat the declining birthrate, the acceptance of immigration, and lifestyle changes. It is possible to stabilize the population at around 80 million people; however, it is difficult to predict, among others, the effects of the evolution of technology, the child-rearing environment, and changes in our awareness. Demographics change slowly; hence we need to face these challenges.

The tide has completely turned 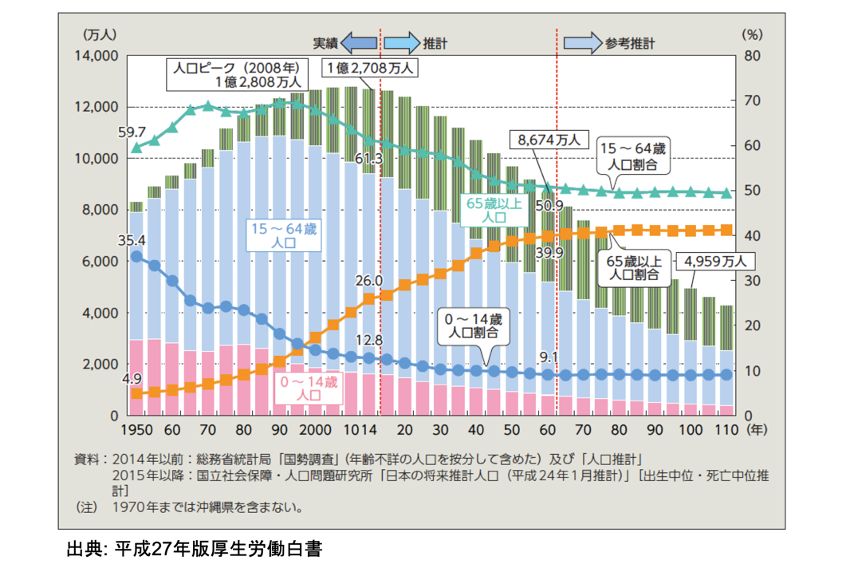 The number of children will decrease, the number of elderly people will increase, and the percentage of the working-age population (those between the ages of 15 and 65), or the so-called working population, will decrease significantly. As the figure shows, even today the aging society is already well underway, with a two-to-one ratio of working people supporting a child or elderly person. By 2060, the working population will comprise about half of the total population, and the ratio of those who work to those who are supported (children and the elderly) will be one-to-one. At that time, the aging rate (the ratio of the population aged 65 years or older) will be about 40%.
Many people over 65 are still able to work vigorously; however, these figures indicate the magnitude of the challenges posed by the declining birthrate and aging population. If those who can work spend their time on child- and nursing care, the productive workforce will dwindle. This is an extremely serious situation. The tide has turned completely since the time when both the population and economy were growing steadily—and this flow is irreversible.
Another important theme is the ability to work healthily and vigorously for a long time. It is already obsolete to treat the retirement age uniformly as 65. Creating an environment wherein seniors with experience and know-how can play an active role is thus key. Working styles and the meaning of work will rapidly evolve.

Labor shortages are already becoming a severe problem in many industries. Issues such as the aging of agricultural workers, shortage of delivery drivers and workers in food/beverage and service industries, and long-term care for the elderly, are frequently addressed in the media. To overcome the challenge of labor shortages, the productivity of a small workforce needs to be elevated amid the situation of a declining population, and particularly the proportion of people working. AI (artificial intelligence) and robotics have evolved at the right time and are being put into demonstrable and practical use. Japan is a suitable target market for these advanced technologies. To mitigate the future labor shortage, we need to rapidly deploy and utilize AI and robotics in all fields by significantly promoting automation, unmanned operations, optimization, and increasing productivity. 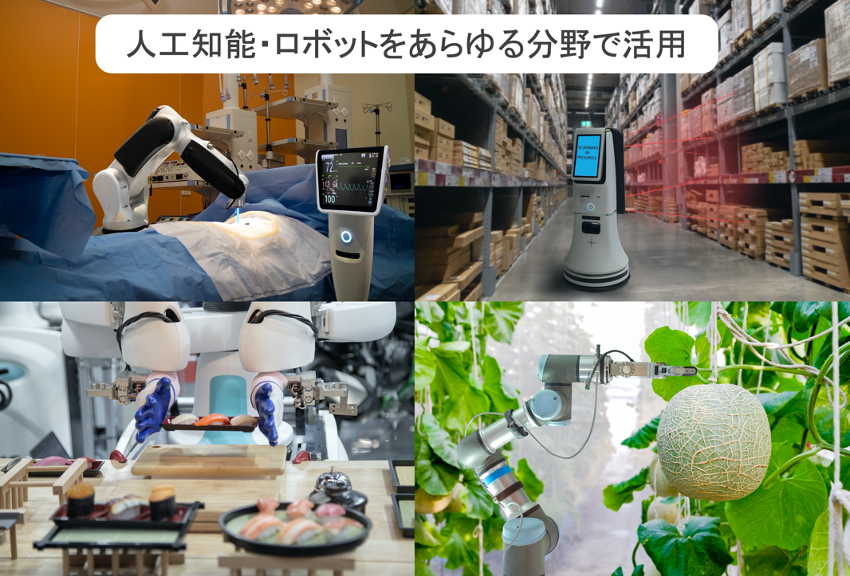 Extensive use of AI and robotics is essential if Japan is to remain prosperous. All sectors are affected, including primary industries such as agriculture, the manufacturing and logistics sectors, healthcare and medical/nursing care facilities, food/beverage and hospitality, construction and infrastructure inspection, security, and cleaning. By building a new society that fully integrates AI and robotics, we will be able to lead the world into the future with implementations that realize an affluent society with a small workforce. This is because the rest of the world, following shortly after Japan, will face the same challenge of declining birth rates and aging populations. This is precisely the optimal time to transform pinch into opportunity.
To achieve this, it is important to commit to using robotics in real workplaces and growing these industries despite initial challenges. We hope that the efforts of the State will not fall behind. In Japan, people sometimes demand excessive quality levels with conservative tendencies about introducing novel technologies. Producers and consumers, developers and users, and the government must work together to rapidly develop products and services.
We have no choice. We don’t have the luxury of time-consuming, comprehensive, or meticulous analysis. We are impelled to actively adopt the latest technologies and advance our innovative approaches through trial and error. We are compelled even if there is no precedent—taking up challenges without fear of failure will open up the future.

Note 1) Some stakeholders predict that the global population will enter decline by 2050—even earlier than the UN projections. The author concurs with this opinion. Darrell Bricker and John Ibbitson’s (translated by Yukinobu Kurata) Empty Planet: The Shock of Global Population Decline, Bungei Shunju, 2020.

Note 2) The April 2017 estimates of the National Institute of Population and Social Security Research (NIPSSR) presented a slightly more gradual population decline than previous estimates. However, since the current decline in the number of births has already exceeded these estimates, this column references the figures in the 2015 White Paper of the Ministry of Health, Labor, and Welfare.

[Tomihisa Kamada: President of TomyK / Co-founder of ACCESS Corporation / Entrepreneur / Investor].
PhD. in Information Science from the Graduate School of Science at the University of Tokyo. Doctor of Science. Founded ACCESS, a software venture company, while still a student. In 2001, ACCESS was listed on the Tokyo Stock Exchange’s Mothers section (currently within the First Section) and expanded its business globally. In 2011, Kamada retired from the company and founded TomyK, a firm providing support to startups, and is currently launching a number of technology startups in the areas of robotics, AI, human augmentation, space, genomics, and medicine. Kamada is the author of the book “Technology Startups Create the Future: Aiming to Become a Tech Entrepreneur” (University of Tokyo Press), which explicates the entrepreneurial mindset.