TOP > Article > How does startup pivoting lead to success? Hypothetical thinking is effective for startups ｜Key to Building the Future vol.2
SHARE
TO TOP 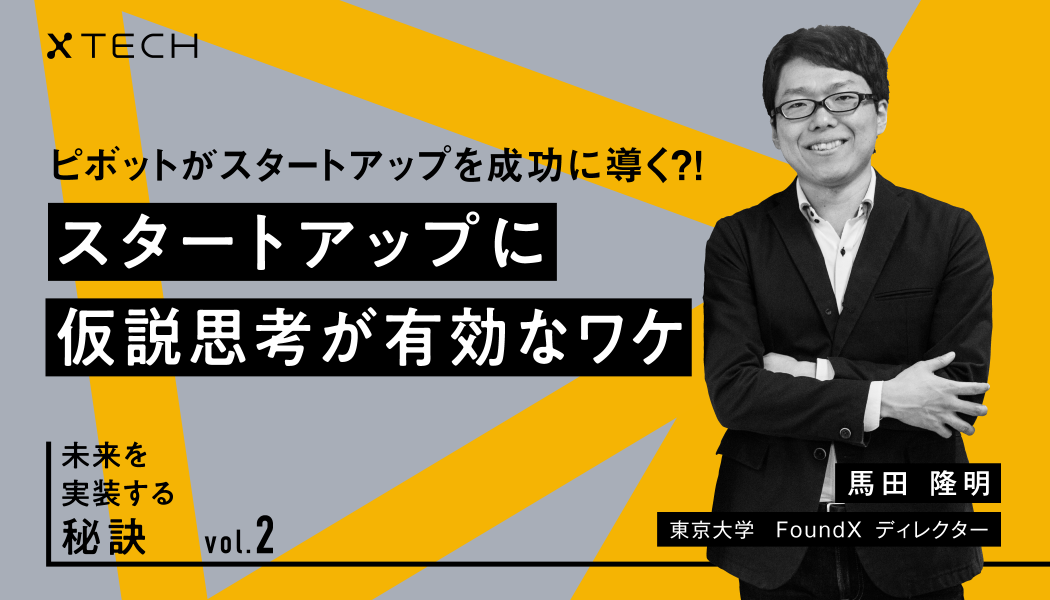 How does startup pivoting lead to success? Hypothetical thinking is effective for startups ｜Key to Building the Future vol.2

Rather than wishful thinking, viewing ideas as hypotheses may actually be a shortcut to implementing the future and flexibly changing direction. Numerous experiments indicate this.

An Italian researcher trained more than 100 entrepreneurs in business [1]. The training content concentrated heavily on startups, including how to create a business model scenario with a minimal viable product (MVP), and how to interview customers. The crux of the experiment followed. The gathered entrepreneurs were divided into two groups. The first group was offered no further business training, while the other group received additional training in more rigorous scientific thinking, such as forming more explicit and controversial hypotheses, deciding what conditions should be met to maintain these hypotheses, and determining the threshold for interpretation of experimental results before hypothesis verification.

What is the reason for these differences in the number of failures and sales? We posit that by pivoting, they were able to make better decisions. Pivoting in the startup world refers to changing the direction of ideas around something.

The group with only business training (that did not learn scientific thinking) tended to focus on their first ideas, strategies, and products without pivoting. Conversely, the group trained in scientific thinking pivoted more than twice as often—if the first idea (hypothesis) was wrong, they eventually succeed in sales by rethinking “like scientists” and either decided to close the company or attain a superior idea.

Another study showed similar results. Startups that pivoted once or twice raised 2.6 times more money and had a user growth rate 3.6 times compared to those that pivoted more than twice or not at all. Thus, optimal pivoting—neither too much nor too little—has been the common denominator of startup growth [2].

We can deduce that—to have a successful startup—it is important to change direction periodically and pivot appropriately, by viewing ideas as hypotheses and flexibly changing them as required.

From my intimate experience of supporting early-stage startups, it appears that the first idea is rarely the right one. Even startups that currently collect billions of yen in funding have followed completely different ideas to those they promoted immediately after launching the business.

Well-known cases include: i) the team behind Slack was originally a startup that developed games; ii) Segment, an analytics tool, started as a classroom feedback tool; and iii) the founders of Soylent, a complete nutrition alternative, were in the business of building Wi-Fi networks for emerging markets. These companies realized success by pivoting from their original ideas to something completely different.

So, what should you be aware of when considering pivoting? As a startup training institution, Y Combinator offers lectures on pivoting startups [3].

They suggest the following guidelines. Create something that you enjoy doing. Recognizing the strengths and weaknesses, use them to your advantage. Moreover, ideas that become pivotal targets should be reevaluated on four axes—market size, founder/market fit, ease of getting started, and the feasibility of obtaining customer feedback.

Make the most of the newly obtained information and experiences during the hypothesis verification process. These are unique to you, thus compelling you to exploit them. Often the real information—such as aspects where customers are in trouble, or the actual structure of the market—is hidden from others and could be the secret that only you know essential to a successful startup.

By starting something, we may become aware of our own needs and challenges. Slack, as mentioned in the previous example, was based on a communication tool created internally to solve the problem of email as an internal communication tool during game development. Segment was founded on the creation of an internal analytical tool to analyze the classroom tool they were developing simultaneously. Soylent—as an idea to reduce food costs—originated from its founders who were in a financial crisis. They developed a superior idea by “starting something, making something, and then realizing what we wanted.” These included secrets that would have remained undiscovered unless something was started—taking advantage of these secrets is imperative!

Changing the hypothesis based on the ideal

Few people possess the perfect idea from the start. Most people start something and use the information and experiences they gain to transition to an enhanced idea. Start something first and then turn it into a better idea.

However, this does not imply that it is better to change everything. A new startup must have a target ideal that is followed. Before pivoting, you must establish a foothold with the ideal as the focus. Alternatively, it may be more efficient to flexibly amend your approach to reaching your goals while observing the situation facing you.

The key is recognizing your ideas as hypotheses and rigorously verifying them. With this attitude, you should start doing something to gain information and experience—which may seem obvious when expressed in this way—which we believe, if done properly, is one of the secrets to reaching success.